For those desiring details on how and why AKA’s sneaker deal with Reebook flopped, the songster has served just that and more in a recent interview.

AKA’s deal with Reebok had led to the creation of a sneaker brand named in part for the South African rapper: SneAKA.

AKA had revealed he was instrumental to the conceptualization of the sneakers and even designed them. Ultimately, however, according to him, he wasn’t paid a dime when the deal flopped. Irate, he had dismissed the guys behind the sportswear giants as crooks. 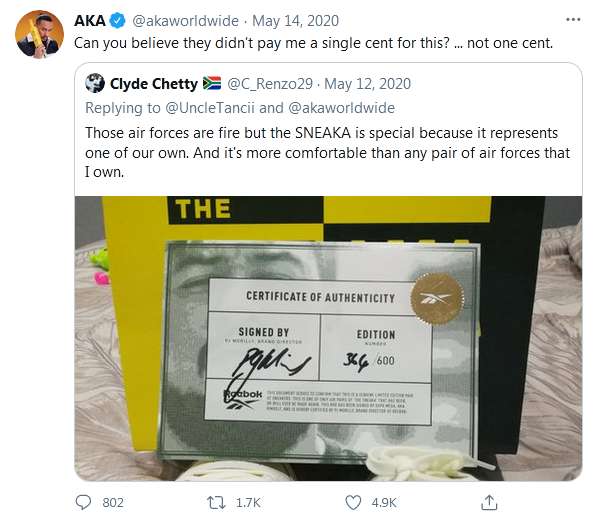 In a recent sit-down with Trending SA, AKA shared more details about the deal which many are probably unaware of previously. It is interesting AKA should return to talks about the failed deal because he had earlier stated he wouldn’t comment about the deal again.

Anyway, you might want to check out AKA’s video interview below and share your thoughts in the comments.

By the way, AKA recently celebrated his birthday and showed off the gifts he received from his fans – collectively called The Megacy.  The “Fela In Versace” songster has also revealed imminent mega deals, buying himself an expensive Walt Disney pen as a prelude.

Tags
AKA Reebok
John Israel A Send an email 29 January 2021
Back to top button
Close
We use cookies on our website to give you the most relevant experience by remembering your preferences and repeat visits. By clicking “Accept All”, you consent to the use of ALL the cookies. However, you may visit "Cookie Settings" to provide a controlled consent.
Cookie SettingsAccept All
Manage Privacy