After a long and productive partnership with Crux Vodka, AKA has announced he’s exiting the brand and launching his own in the near future.

The “Fela in Versace” rapper announced the discontinuation of the partnership in a post on his verified Instagram page.

It’s all good on both sides as they are parting ways on an amicable note. The brand conceded that AKA remains a part of the Cruz Vodka family, although he’s exiting on his own terms.

While at Cruz Vodka, AKA launched different spirits under the brand, including the much-loved Cruz Vodka AKA Watermelon and a banana flavour. As he exits the brand, his name will also be removed from the Cruz Watermelon bottle, and the Cruz Banana will be discontinued later this summer. You can check out the statement below 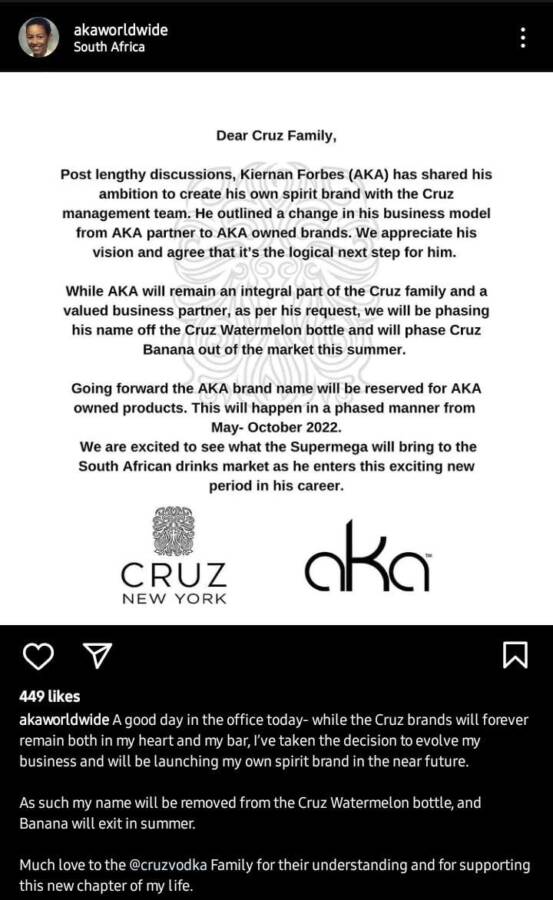 It’s unclear when AKA will be launching. Even more uncertain is why he decided to end his partnership with Cruz Vodka. The decision to launch his own alcohol rand in the future might be the clue.

Is he trying to compete with his rival and adversary Cassper Nyovest, who owns his own alcohol brand?

That’s the chief suspicion. Still, it will be interesting to see what AKA launches in the coming days and what impact it’ll make.

Tags
AKA Cruz Vodka
John Israel A Send an email 25 May 2022
Back to top button
Close
We use cookies on our website to give you the most relevant experience by remembering your preferences and repeat visits. By clicking “Accept All”, you consent to the use of ALL the cookies. However, you may visit "Cookie Settings" to provide a controlled consent.
Cookie SettingsAccept All
Manage Privacy