Like every other celebrity out there, AKA has got robust plans for his daughter Kairo, plans that will make her a super celebrity herself and secure the bag.

Being the daughter of celebrities (AKA and DJ Zinhle) ipso facto makes her a celebrity. She isn’t leaving the turf of renown anytime soon, as the Supamega has envisioned a show for her, a show that will see the 4-year old entertain kids her age and people generally.

Called The Kairo Show, it follows the unveiling of AKA’a own show, on AKATV, called #TheBraaiShow. Both shows are markedly different, however, with AKA’s focusing on industry friends.

AKA announced the coming of The Kairo Show, asking fans of their readiness for what is to come. It appears the show could do with some fan suggestions, as AKA wondered in another tweet that the show might perhaps be giving out toys to those in most need.

By the way, it appears Kairo is already facing criticism – some say being abused – by fans. Some peeps think the idea of the show entirely silly and even asked the “Fela in Versace” rapper to drop it.

AKA had a ready clapback. He told the fan he shouldn’t be mad his father gave him no TV show of his own. 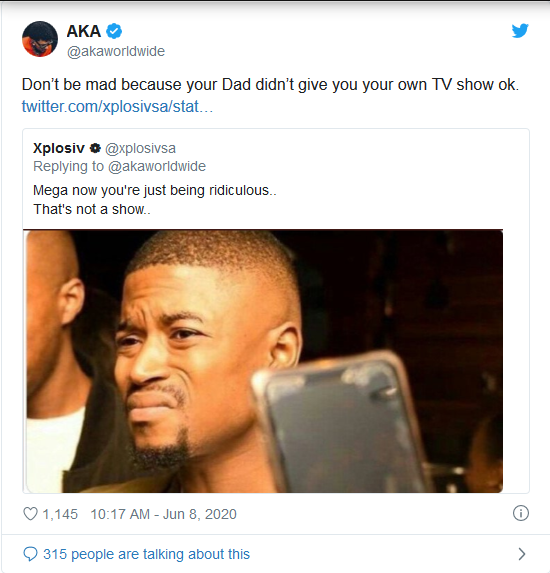 In another instance, he was pretty benign, thinking the attack on his daughter entirely comic, this abuse of his daughter on social media. He quietly laughs it off. In fact, he thinks the critics have been rather mild.

In contrast, Kairao’s mother DJ Zinhle lashed out at her child’s critics, describing her as of limits. 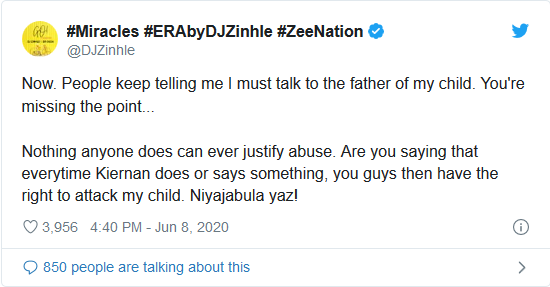 By the way, AKA and DJ Zinhle are no longer together, AKA having taken a shot at another lady. Apparently AKA’s mother has endorsed his new love interest.

DJ Zinhle herself is forging ahead follow her second break with the champ. Recently she received a bouquet of flowers from a mysterious admirer, leaving fans wondering if she was in a relationship with another person at the moment.

Regarding the criticism and abuse directed at her daughter, DJ Zinhle is pretty miffed. While it is okay to be quiet about some things, according to her, there comes a time when one has to speak out and speak up.

That time is now, and she wouldn’t have anyone bully her or her daughter – or so she made clear in a new tweet.

Well, what do you think of the upcoming show and the reception so far from fans? You may want to join the conversation by dropping your thoughts in the comment section.