Mzansi rapper AKA is displeased with random people calling his line and asking for beats, and he’s issued a word of caution to those doing so. They should stop calling his line.

The songster made this clear in a recent post to His Instagram Story, noting that if anyone he’s conversant with speaks good of another artist and wants that artiste to get in touch with him, they would ask if it’s okay first.

He insisted that random strangers should not call or get in touch with him or a beat or song or something similar. You can check out his post below. 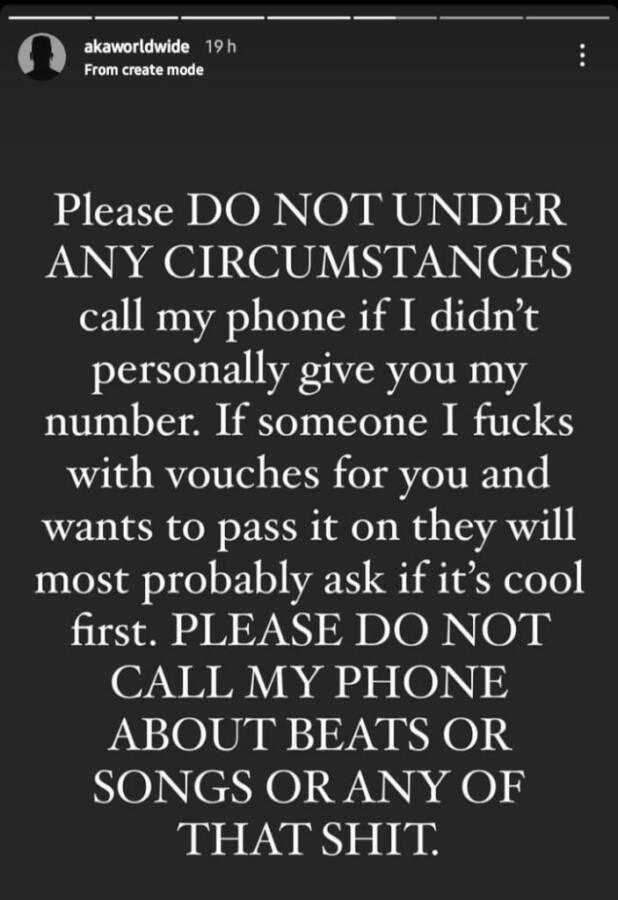 AKA is currently having the time of his life with his new flame Nadia Nakai. He’d teased his relationship with her, bought her a Rolex, but has not publicly acknowledged that they’re dating.

Still, Mzansi has been able to put two and two together. Now it’s public knowledge that they’re dating and enjoying every minute of it. Just recently, the pair had stormed a club in Cape Town, where they partied hard and ended up pouring champagne on each other’s watches – probably in a playful show of authenticity,

Tags
AKA
John Israel A Send an email 22 January 2022
Back to top button
Close
We use cookies on our website to give you the most relevant experience by remembering your preferences and repeat visits. By clicking “Accept All”, you consent to the use of ALL the cookies. However, you may visit "Cookie Settings" to provide a controlled consent.
Cookie SettingsAccept All
Manage Privacy