A day ago, on his verified Instagram page, AKA shared an image of him and EFF chief Julius Malema standing side by side. It would have been just another picture, except that Julius Malema was clearly displaying Cruz Vodka AKA Watermelon.

AKA has a stake in this alcohol flavour of the Cruz Vodka brand that is named for him and his favourite fruit. In the picture, AKA had urged fans to drink responsibly, reminding them that South Africa is still on level 2 in the fight against the coronavirus. 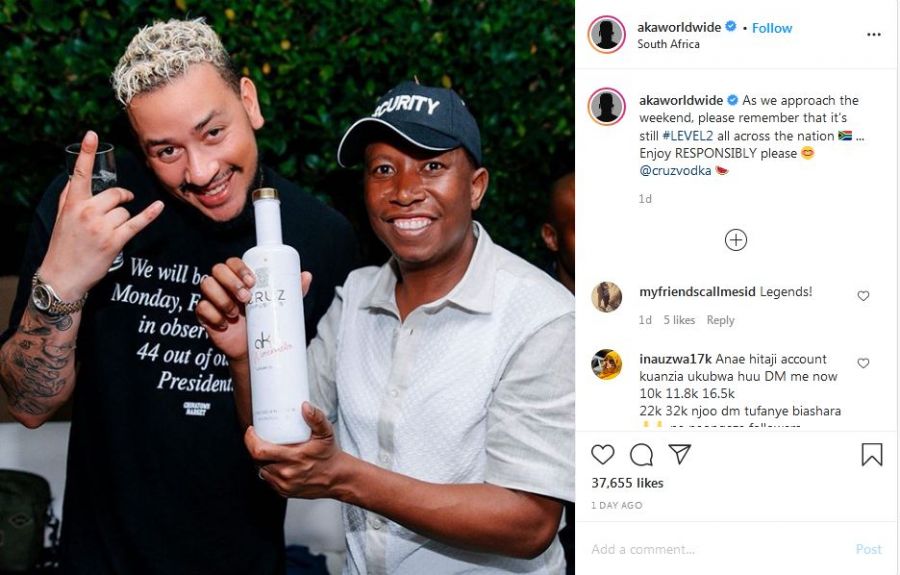 The picture provoked controversy near instantly, especially as alcohol sale has been banned by the government.

AKA is on rapper who has never hidden his alcohol hustle. The “Fela in Versace” hitmaker has been clamouring for the lifting of the ban on alcohol, sporadically providing statistics indicating the effect of the ban of families’ income.

At the rate AKA is going, it doesn’t look like he would back down on his alcohol advocacy anytime soon. By the way this isn’t the first picture of him and Juju together, with Juju holding Cruz Vodka AKA watermelon. He had shared something similar months back

Well, what do you think of the picture? Is it something you would endorse? You are welcome to join the conversation by dropping your thoughts in the comment section below.

Tags
AKA Julius Malema
John Israel A Send an email 28 August 2020
Back to top button
Close
We use cookies on our website to give you the most relevant experience by remembering your preferences and repeat visits. By clicking “Accept All”, you consent to the use of ALL the cookies. However, you may visit "Cookie Settings" to provide a controlled consent.
Cookie SettingsAccept All
Manage Privacy