Kiernan “AKA” Forbes recently lost R10k betting on sports. It wasn’t his first bet, though; he had won previous bets.

However, when his loss became public knowledge, some tweeps trolled him online, stating he would have had a different outcome if he had listened to them. In reaction to that, AKA had to clarify when he bet on soccer matches.

According to the “Lemons (Lemonade)” chanter, he bet on sports for fun and doesn’t need to bet to sustain his lifestyle. He also assumed that the tweeter, who had trolled him and informed him of how much he would have won if he had taken his odds, had won something. So he was like, thanks, but no thanks. You can check out the tweet below. 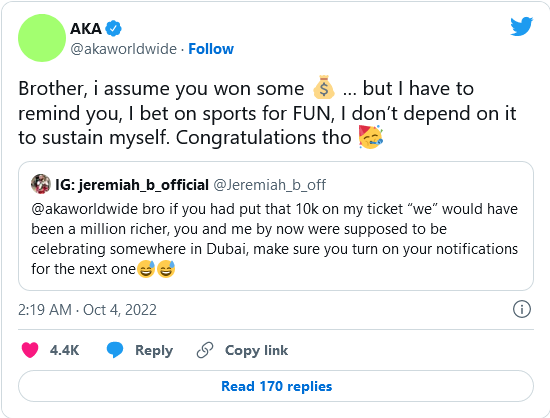 AKA is a diehard Manchester United fan, and his commitment to the club is deep enough for him to get a tattoo of the club’s logo on his arm. Two months back, he had bet on United and was screaming on Twitter while following the match he had bet on. Then, some tweeps started laughing and asking him if betting is now his side hustle.

Kiernan’s latest tweet appeared to have answered the questions, old and new. Can you beat that?

Tags
AKA
John Israel A Send an email 5 October 2022
Back to top button
Close
We use cookies on our website to give you the most relevant experience by remembering your preferences and repeat visits. By clicking “Accept All”, you consent to the use of ALL the cookies. However, you may visit "Cookie Settings" to provide a controlled consent.
Cookie SettingsAccept All
Manage Privacy