If you’re looking forward to seeing AKA’s girlfriend Nelli Tembe on his imminent “Finessin” music video, you may have to wait forever as the songster has clarified that she would not make it.

A fan who goes by the twitter handle @RubuThulisa had asked if there was any chance of Nelli Thembe featuring in “Finessin” music video, and AKA had made it clear there were zero chances. He didn’t explain why he wouldn’t be featuring her, however. 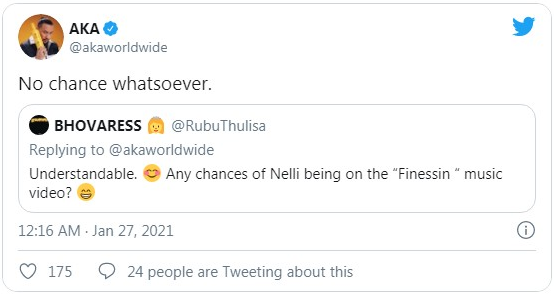 By the way, AKA recently bought for himself an expensive Walt Disney pen and paper. The pricey purchase, based on his comments on his social media pages, is a prelude to him signing bigger deals. As far as he is concerned he is done with the small stuff.

Not a bad way to start 2021, apparently. Also, in case you missed it, where it has become obvious AKA would no longer have a boxing match with rival Cassper Nyovest, Prince Kaybee, another notable South African muso, has indicated he is interested in heading into the ring with Cass.

Well, what do you think of AKA deciding to not include Nelli in his  “Finessin” video? You might want to join the conversation by dropping your thoughts in the comment section below.