AKA recently released a song titled “Lemons (Lemonade)” in collaboration with Nasty C. it was well received and continues to garner praise from those who have listened to it.

One AKA fan was particularly impressed with the song’s bridge and took to Twitter to share his views about it. The fan, who goes by the Twitter name Huey, noted that the intro bridge was just too good, which makes him want to return to it every time.

That vetting encouraged AKA to share some intriguing details about the bridge. In response to the fan, he noted that his girlfriend Nadia Nakai was around when he was recording it, and she couldn’t believe what he had done with it. It turned out pretty good, and he shouted out Busta Rhymes, whose flow he aped. You can check out the tweet below. 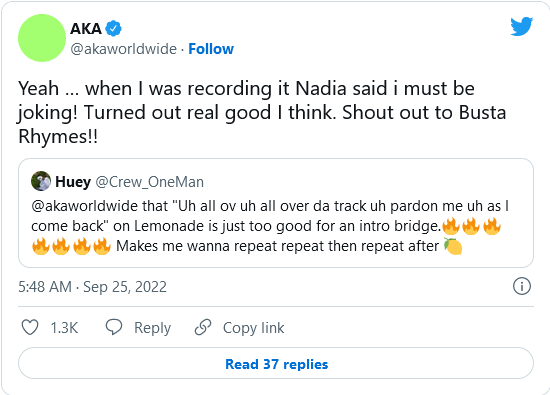 AKA and Nadia Nakai started dating only recently, but they have been giving Mzansi couple goals already, with some tweeps asking when they would formalize their relationship. Well, Nadia Nakai had hinted that they are cool and she’s ready to have his baby.

The question then should be, when would Kiernan be ready for another baby, having sired a daughter with his ex-girlfriend DJ Zinhle?

Tags
AKA Nadia Nakai
John Israel A Send an email 27 September 2022
Back to top button
Close
We use cookies on our website to give you the most relevant experience by remembering your preferences and repeat visits. By clicking “Accept All”, you consent to the use of ALL the cookies. However, you may visit "Cookie Settings" to provide a controlled consent.
Cookie SettingsAccept All
Manage Privacy