If you have been looking forward to an AKA-Emtee collaboration, you’re not alone. It might be a long dream, however.

Celebs are known to create time to speak with their followers on social media. AKA recently created such time, letting his fans ask him questions on music and other artistes. The songster answered questions regarding his future projects, among others. Asked other artistes he would love to work with, AKA mentioned Yanga Chief and Sjava. The one has got a close relationship with AKA and the other was on AKA’s The Braai Show recently.

A fan thought AKA would make great music with Emtee. But the idea of the two working together appears to be a long shot. According to AKA, for the two of them to collaborate on a project, they’d have to live in the same house for a month to truly grasp the concept. You can check out his tweet below. 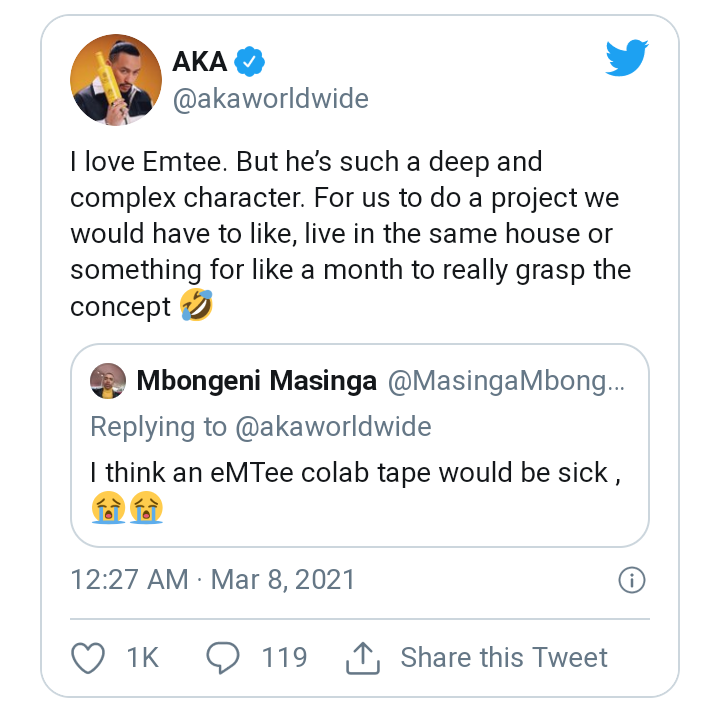 So far in his music career AKA has only done one joint project, “Be Careful What You Wish For,” with Anatii.

What do you think of AKA’s take in a possible Emtee collaboration? You may want to join the conversation by dropping your thoughts in the comment section below. .