Supercharged by a recent court victory affirming his ownership of a 50 percent stake in The Braai Show, Mzansi rapper AKA is gearing to sue everyone who has benefited from the show in the period of the litigation, when Cake Media claimed he had no stake in the show.

The show was hosted by AKA in its first season. For the second season, Cake media had picked AKA’s adversary Cassper Nyovest as host, without consulting AKA.

This led to a great tumult, with AKA getting an interdict on the show, temporarily stopping it. But then he withdrew it, asking his fans to watch the show as he’d still get to benefit from it because of his 50 percent stake.

But the case remained in court, according to him. Well, the court has ruled that he indeed owns a 50 percent stake in the show. AKA has celebrated his victory with posts on social media. But he isn’t done yet.

In a recent post, in reply to Zalebs, the songster had noted that the accounts of the show’s previous season will be audited and he will be coming for his money – possibly suing everyone who benefited from it at his expense. 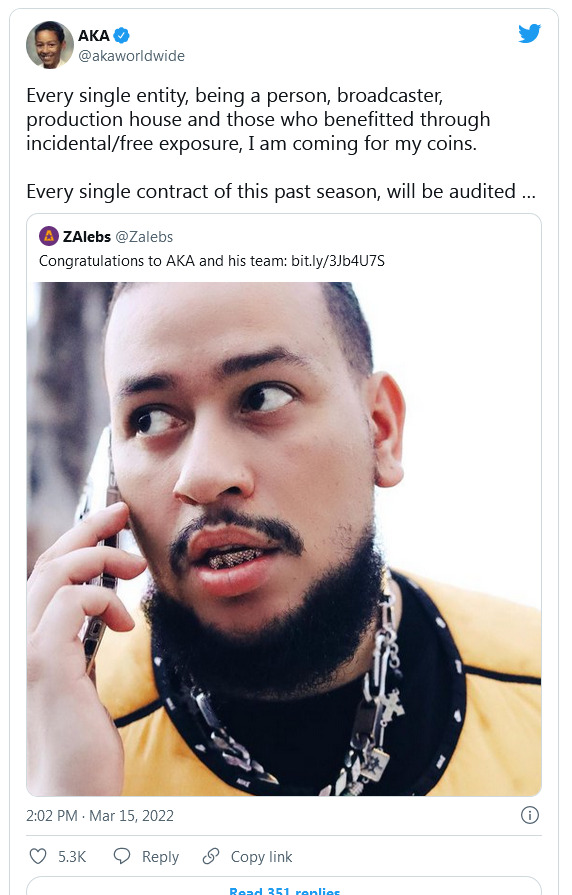 But will he win again this time?

Tags
AKA
John Israel A Send an email 17 March 2022
Back to top button
Close
We use cookies on our website to give you the most relevant experience by remembering your preferences and repeat visits. By clicking “Accept All”, you consent to the use of ALL the cookies. However, you may visit "Cookie Settings" to provide a controlled consent.
Cookie SettingsAccept All
Manage Privacy