If you’re active on social media, then you must have seen a couple of posts on the debate whether SA Hip Hop is really dead. Many have shared their opinions citing why they believe the genre has lost its impact on the scene.

Of course, this is something no one has the right answers to. Since Supa Mega made his comeback, following the loss of Nelli Tembe, fans have stated that he’s back to “save” SA Hip Hop. Unfortunately, the “Cross My Heart” does not believe the genre died to begin with.

@akaworldwide talks on the prominent conversation around Hiphop and amapiano.

Y’all calling facts or cap on this one?🤔 pic.twitter.com/QKzTAcBQMX

He has often shared his thoughts on the issue. This time, Supa Mega shared a video of himself smoking and vibing to Madumane’s verse on “Izolo”. In the captions, he asked his followers why they would say SA Hip Hop is dead when Madumane is clearly rapping in the song? 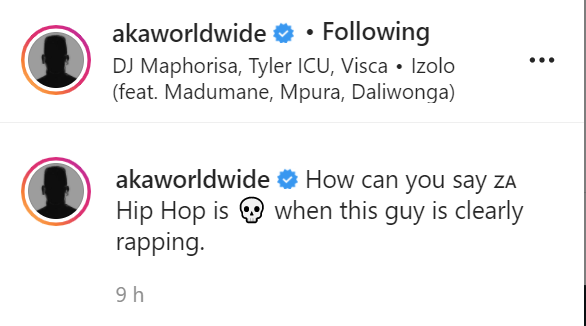 Tags
AKA Dj Maphorisa Hip Hop Madumane
John Jabulani Send an email 27 September 2021
Back to top button
Close
We use cookies on our website to give you the most relevant experience by remembering your preferences and repeat visits. By clicking “Accept All”, you consent to the use of ALL the cookies. However, you may visit "Cookie Settings" to provide a controlled consent.
Cookie SettingsAccept All
Manage Privacy