AKA recently released a number dubbed “Paradise” in collaboration with Musa Keys and Gyakie. The number resonated with many out there, one of whom decided to confess his pleasure in the song, although he is more of a fan of AKA”s rival Cassper Nyovest.

In a tweet, the Twitter user, who goes by the name Sir Rain, noted that the song resonated with him and he actually loves it, He said he hates to admit his admiration for the number because he’s a fan of Cassper Nyovest, a rapper with whom AKA has always been in conflict.

Reacting to the tweet, AKA had noted that it is okay. The subject is after all music and not football. You can check out his reaction below. 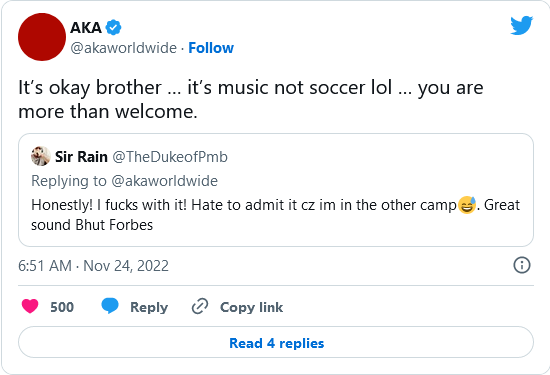 AKA and Cassper Nyovest have been rivals for as long as one can remember. There have been several attempts to make them settle their rift, but they have all yielded nothing. Cassper insists there’s no forgiving AKA because he insulted his parents.

He had challenged the “Fela in Versace” rapper to a boxing match so that they can settle their difference. But nothing has come out of the challenge as well. It remains to be seen if they will somehow settle.

Tags
AKA
John Israel A26 November 2022
Back to top button
7
Close
We use cookies on our website to give you the most relevant experience by remembering your preferences and repeat visits. By clicking “Accept All”, you consent to the use of ALL the cookies. However, you may visit "Cookie Settings" to provide a controlled consent.
Cookie SettingsAccept All
Manage Privacy