AKA has lashed out at his rival Cassper Nyovest for “confusing the fans” about their imminent fight. The fight was previously slated to hold this year but was apparently deferred because of the coronavirus pandemic.

In a recent chat with fans, Cassper Nyovest had indicated the fight with AKA will hold at the 20,000 capacity Dome, so that AKA would know what it feels like to fill it up for the first time in his life, he added mockingly.

A fan wanted to know if AKA doesn’t have an advantage over Cassper Nyovest, but the “Any minute Now (AMN)” rapper laughed this off, stating he watches Tyson and shorter boxers have a way of cutting the distance.

AKA, who had apparently taken a break from social media, popped on Twitter to the news of Cassper’s tweets about their fights and kicked at once. According to him, contrary to what Cassper said, the fight between them will hold in 2021, not 2020.

You can check out screenshots of AKA’s take on the boxing match below. 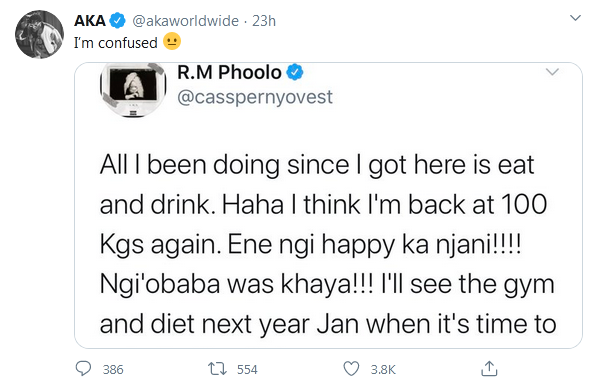 Who do you think will win the fight between the two rivals? Why? You might want to join the conversation by dropping your thoughts in the comment section below.