AKA announces plans to air the second season of his show “The Braai Show” soon.

SA Hip Hop star, AKA is now one of the biggest TV personalities in the country. The “Cross My Heart” star made the transition into TV last year, and it has been a huge success. He made the debut with his show “The Braai Show”.

In it, he entertains and interviews some of the biggest personalities in the country. The first season of the show features appearance from DJ Tira, Nadia Nakai, Costa Titch, Minister of Transport Fikile Mbalula, Prince Kaybee, entertainment personality, Somizi Mhlongo, and more.

In a recent tweet, he revealed to his followers that the first season averaged a total 2.4 million viewers each week. He also announced that the second season of the show will be airing soon. We know he will be doing things differently this time. A big shoutout to him. 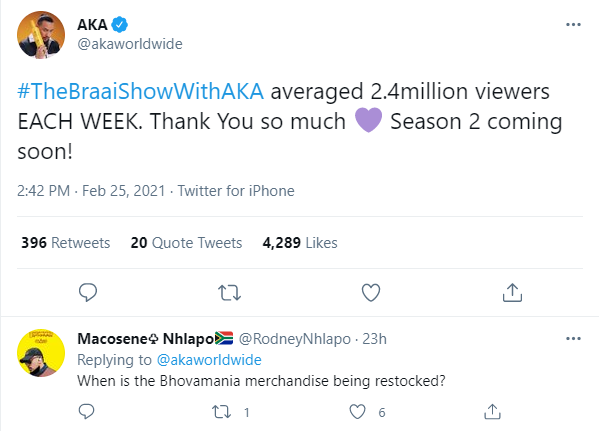 Tags
AKA
John Jabulani Send an email 26 February 2021
Back to top button
Close
We use cookies on our website to give you the most relevant experience by remembering your preferences and repeat visits. By clicking “Accept All”, you consent to the use of ALL the cookies. However, you may visit "Cookie Settings" to provide a controlled consent.
Cookie SettingsAccept All
Manage Privacy