AKA is a bloke seriously in love. And from the sound of things, his pooch has taken a liking to his new flame as well. Yup.

Nadia Nakai has just revealed that. In a clip she shared, she could be seen bonding with AKA’s dog. The hairy buddy loved the stroking so much that when the songstress attempted to stop, the animal appeared to get moody. 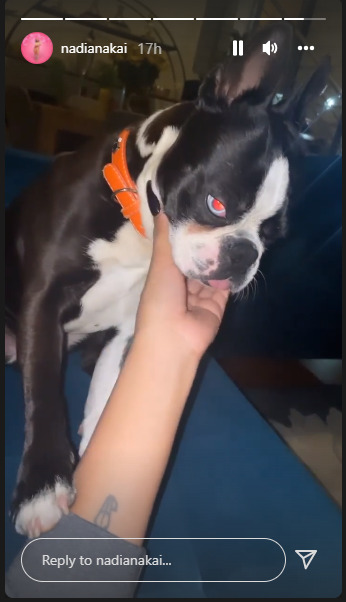 Named King Louis, after one of the French kings, the dog was reportedly adopted last year by the “Fela in Versace” rapper.

AKA’s relationship with Nadia Nakai has been of great interest to the public. He’d interviewed her for the final episode of season 1 of The Braai Show, which he was hosting.

Toward the end of the year, he’d apparently gifted Nadia Nakai a Rolex watch and she flaunted the same on social media, noting it was from a “Secret Santa,” who would later be revealed to be AKA.

The two rappers have not formally admitted they’re dating, but the evidence points to them being an item already.

And with Mr. Lou – yeah, that’s the name of AKA’s dog – getting fond of Nadia Nakai, it’s safe to say something good might come out of this relationship.

Tags
AKA Nadia Nakai
John Israel A Send an email 11 February 2022
Back to top button
Close
We use cookies on our website to give you the most relevant experience by remembering your preferences and repeat visits. By clicking “Accept All”, you consent to the use of ALL the cookies. However, you may visit "Cookie Settings" to provide a controlled consent.
Cookie SettingsAccept All
Manage Privacy