“Fela In Versace” rapper AKA has just revealed that his girlfriend Nelli Tembe doesn’t know his hit song “Run Jozi.” To him, that’s Gucci.

In fact, AKA revealed that Nelli Tembe doesn’t know any of his songs released before his “Touch My Blood” album, a project AKA proudly calls a classic.

Not all his fans ae convinced Nelli Tembe doesn’t know “Run Jozi,” though. As far as they are concerned the song was too popular for her not to know it.

One particular fan, who goes by the Twitter handle @ElasticRue, wasted no time accusing AKA of lying. But the SupaMega laughed this off, wondering he should lie about that.

By the way, there were others standing in Nelli Tembe’s defence and letting it be known that is isn’t everyone who listens to hip hop. You can check out the screenshots below. 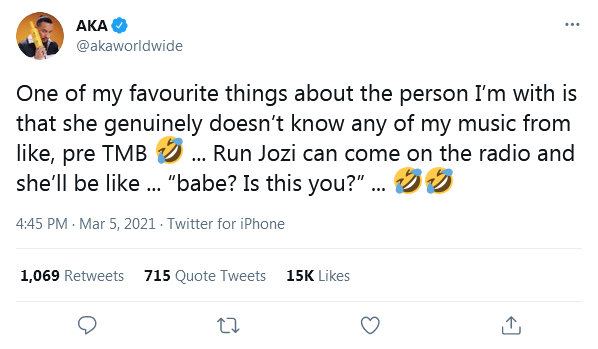 In case you missed it AKA recently fired a shot at rival Cassper Nyovest, stating if Cass should swear at his mother, he wouldn’t need a ring to fight Cass.

What do you think of AKA’s claim his girlfriend doesn’t know his hit song “Run Jozi”? You’re welcome to join the conversation by dropping your thoughts in the comment section.

Tags
AKA
John Israel A Send an email 8 March 2021
Back to top button
Close
We use cookies on our website to give you the most relevant experience by remembering your preferences and repeat visits. By clicking “Accept All”, you consent to the use of ALL the cookies. However, you may visit "Cookie Settings" to provide a controlled consent.
Cookie SettingsAccept All
Manage Privacy