DJ Maphorisa thought to twist the narrative by giving himself his own flowers through tweets in a society where flowers are only given to people at their gravestones. For the majority of amapiano musicians, DJ Maphorisa brags about having revolutionized the game.

Phori vented on Twitter about how many musicians had copied him. “All piano cats followed my steps… let it sink it,” he tweeted. He supported his assertion with documentation that showed agreements reached and actions taken during the previous few years.

“I signed with Electromode 3 years ago, everyone followed and signed with distributors, I changed my mind signed with Sony Major label, look wats happening everyone is signing with a major label, I switched the market share chief facts, I signed the biggest deal with Sony in SA,” he wrote. 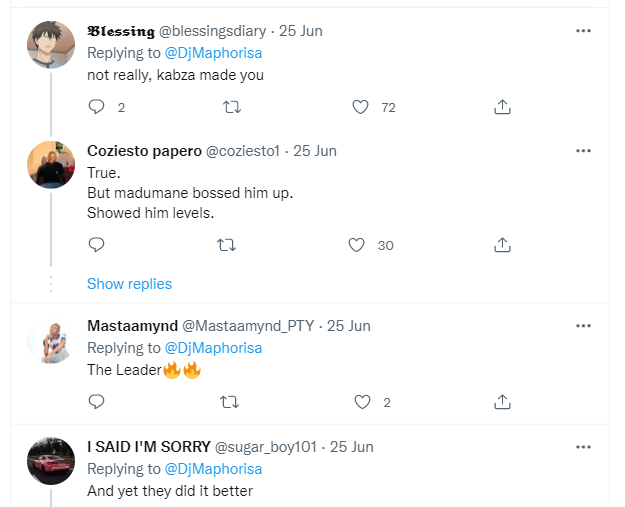 Maphorisa aspires to be recognized as a trailblazer but is thrilled to see other musicians gain from all he has accomplished. “I changed the game for good we all winning chief,” he wrote. It would appear that he takes great pleasure in bragging about his individual accomplishments, much as he did when he recently acquired the legal right to his songs.

“For me, it’s important to own what I created, it obviously comes with a lot of work because you don’t have “big machine” support. But it’s worth it in the long run,” he explained.

Tags
Dj Maphorisa
Ikedichim Chibundu Send an email 27 June 2022
Back to top button
Close
We use cookies on our website to give you the most relevant experience by remembering your preferences and repeat visits. By clicking “Accept All”, you consent to the use of ALL the cookies. However, you may visit "Cookie Settings" to provide a controlled consent.
Cookie SettingsAccept All
Manage Privacy