South African actress Amanda Du-Pont and her broadcaster counterpart Masechaba Ndlovu have refused to apologize to Jub Jub’s mother Mama Jackie despite her demands in a case that’s pending in court.

Amanda and Masechaba had both claimed that Jub Jub raped them at Mama Jackie’s house.

An infuriated Mama Jackie had filed a case in court against the two ladies, demanding an apology. However, instead of apologizing or retracting, both of them filed answering affidavits through their lawyer.

Trouble started when Jub Jub claimed during a sit-down with MacG that he “smashed” Amanda Du-Pont when they were together. In response, Amanda had released a video in which she claimed that Jub Jub taped her instead – for two years. She mentioned that it all happened at Mama Jackie’s house.

The video went viral instantly. That was when Masechaba Ndlovu came out as well to claim that Jub Jub raped her at Mama Jackie’s house as well. Mama Jackie had headed to court, seeking a retraction and an apology.

With Amanda and Masechaba insisting Mama Jackie isn’t getting all she demanded, it would be interesting to see how the case would be resolved ultimately. 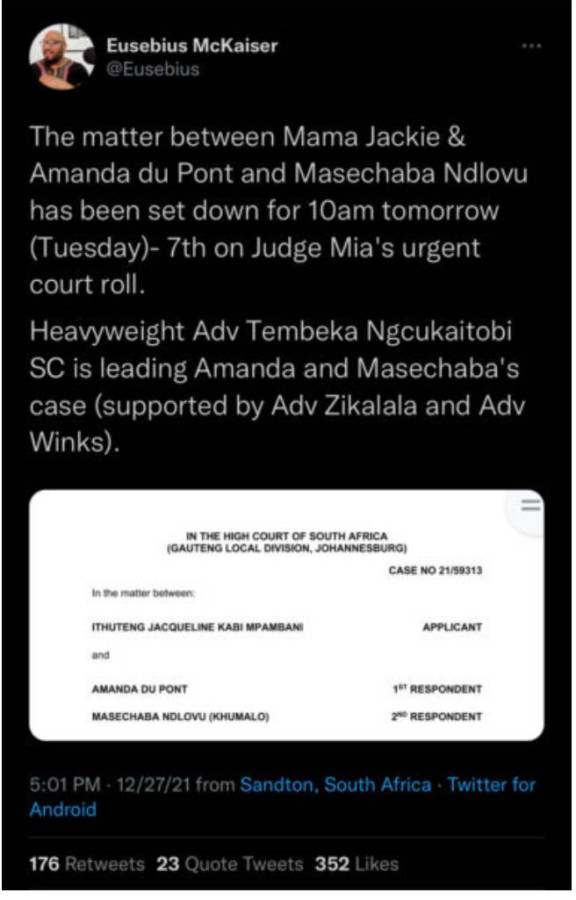 We’ll be here to bring you all the details. You may want to stay tuned for updates.

Tags
Amanda du-Pont Mama Jackie Masechaba Ndlovu
John Israel A29 December 2021
Back to top button
Close
We use cookies on our website to give you the most relevant experience by remembering your preferences and repeat visits. By clicking “Accept All”, you consent to the use of ALL the cookies. However, you may visit "Cookie Settings" to provide a controlled consent.
Cookie SettingsAccept All
Manage Privacy