From the conversation, it was clear that Ambitiouz might have regrets, but losing some artistes is not one of them. A fan, who goes by the handle @RoyLethu, had asked the record label if it regrets losing the rappers Flvme and A-Reece.

In reply, the record label made it clear that it regrets nothing. And if it should have any regrets at all, it wouldn’t be losing Flvme. 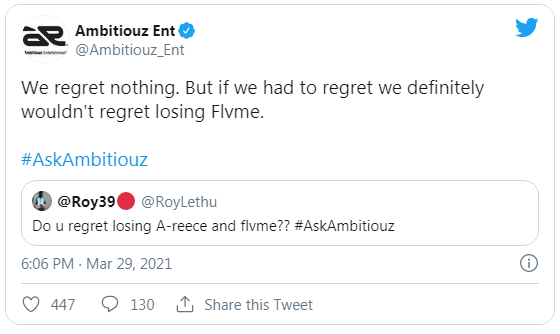 Both artistes were previously signed to the record label but appear to be pursuing solo careers at the moment. At Ambitiouz, A-Reece had released his “Paradise” album. Now fans are waiting for a sequel.

On his part, Flvme has dropped a couple of projects, including Candy Man.

Ambitiouz’s reactions to losing Flvme provoked mixed reactions from fans. One fan claimed to be seriously into Flvme’s music previously. The fan claims he no longer listens to Flvme because the rapper has become a clout chaser.

By the way, Ambitiouz is famous for speaking its mind online, riling some people along the way, including its former artistes. It has managed to stay socially relevant this way. But for how long?