Ambitiouz Entertainment is active on the streets on Mzansi music and also on the streets of Twitter, ready to hurl missiles at anyone trying to downplay is role and place in South African music.

When the South African president Cyril Ramaphosa announced during #FamilyMeeting the current position of the country in the fight against rhe coronavirus, Ambitiouz Entertainment had asked the president to open up on hits from rival record labels Universal Music and Mabala Noise.

A fan who was taking stock of the past year, laughed at Ambitious Entertainment, insisting that Universal music group released the most streamed hip hop album of 2020.

Ambitiouz Entertainment ht back, stating that hits get played on radio, a place it routinely claims dominance, insisting the record label is not scared by streams (from rival record labels).

Clarifying, the record label insists that having 50 million streams do not necessarily mean that 50 million people stream the works of an artiste. 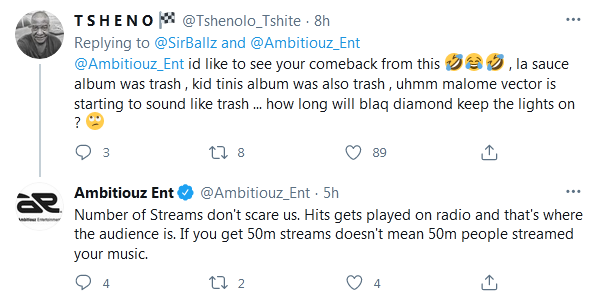 The debate is ongoing. And it doesn’t look like it is going to end anytime soon. What do you think of Ambitiouz Entertainment’s response to the fan, though? You might want to join the conversation by dropping your thoughts in the comment section. Way to go!