The label made its plans known in a recent tweet but failed to tag the American to it. The tweet generated many comments from Twitter denizens. 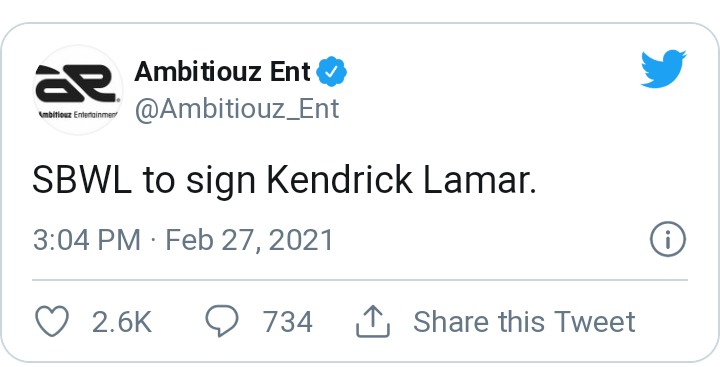 Some peeps scoffed at the plan, thinking it nothing more than ego-tripping on the part of the controversial record label.

One fan, laughing out loud, noted that the American rapper’s wardrobe alone would buy Ambitiouz Entertainment. Another fan described the record label as too broke for the American.

It wasn’t all criticism, though. Some fans commended the record for having become ambitious.

By the way, Kendrick Lamar is one of the notable figures in global pop. Recent data from from Chart Data indicate that the rapper’s “DAMN” project has been charting for the past 200 weeks on Billboard 200.

If Ambitiouz Entertainment should sign the American, it would be the most ambitious move in its history. The record label was formerly home to Amanda Black, Emtee, Sjava and A-Reece, among others.

Well, do you think Ambitiouz Entertainment can and would eventually sign Kendrick Lamar? You may want to join the conversation by dropping your thoughts in the comment section below

Tags
Ambitiouz Entertainment Kendrick Lamar USA
John Israel A Send an email 3 March 2021
Back to top button
Close
We use cookies on our website to give you the most relevant experience by remembering your preferences and repeat visits. By clicking “Accept All”, you consent to the use of ALL the cookies. However, you may visit "Cookie Settings" to provide a controlled consent.
Cookie SettingsAccept All
Manage Privacy