Good news is on the horizon for Anatii fans as the songster is returning to the music orbit, apparently with a new project.

The songster literally vanished after releasing his “Iyeza” album, which celebrated his roots. He is coming with new music and fans are excited. We are, too, of course.

Anatii’s pal JR confirmed the songster has got new music on the way in a recent tweet. In the tweet, JR, who had called out Mzansi celebs who are silent in the face of the unrest in Nigeria over police brutality, stated that Anatii had invited him over to listen to his album.

JR made his way to Anatii’s crib and played the songs his friend had been working on. He dropped twelve flame emojis, indicating Anatii’s imminent project might be a hit  with fans. 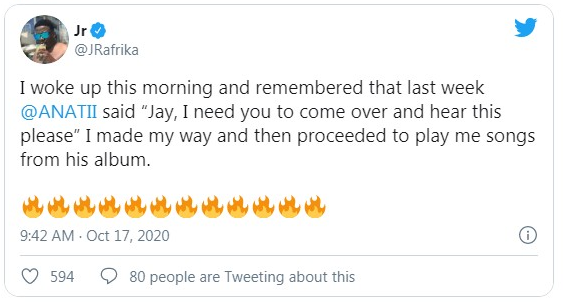 There’s no talk yet of album name, of features, or even of tracklist. But then you can count on us to bring those to you as soon as they drop. From the looks of it, Anatii won’t be following his “solo album” path of 2018.

Or what do you think? You might want to join the conversation by dropping your thoughts in the comment section below.