Andile Mpisane is 20. To celebrate this memorable day in his life, the young bod has decided to give back to the community, educationally.

Aware of the feels must fall campaign by students and other interested parties and determined to contribute to students’ welfare, on his birthday, the soccer star announced plans to aid students with a collective sum of R200k.

That sum will be given to 20 university students, each student getting R10k. The sum will not be paid to the students’ account, though, but to the institutions in which they’re studying.

To be considered for the cash award, a student need only follow the process outlined below. The student must send an SMS to 48426, indicating the following:

The closing date for the application is 27th March, with the list of winners to be announced on on the first week of April. Andile Mpisane has been praised for his kind gesture by many, including the comedian Lasizwe.

By the way, besides applying, students can also nominate others for the award. Well, what do you think? You may share your thoughts in the comment section below. 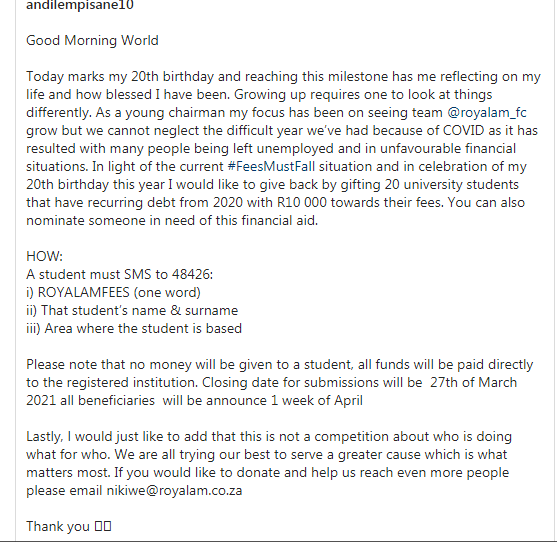 Tags
Andile Mpisane
John Israel A Send an email 16 March 2021
Back to top button
Close
We use cookies on our website to give you the most relevant experience by remembering your preferences and repeat visits. By clicking “Accept All”, you consent to the use of ALL the cookies. However, you may visit "Cookie Settings" to provide a controlled consent.
Cookie SettingsAccept All
Manage Privacy