A day ago, Kiernan Jarryd Forbes, the South African rapper known professionally as AKA, took to Twitter to celebrate “Cross My Heart” and “Energy,” two of his songs which clinched the 6th and 14th positions on SA’s radio most played songs between 17th and 23rd of July.

He celebrated himself as the saviour of South African hip hop, urging whoever cares to listen to thank him later for the information. By the way, the two songs are part of the three songs AKA released from his imminent Bhovamania album. 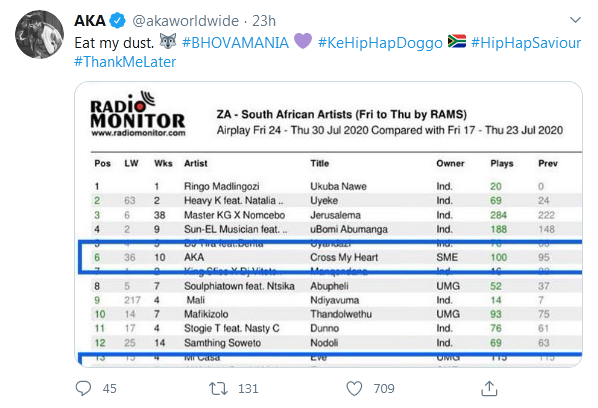 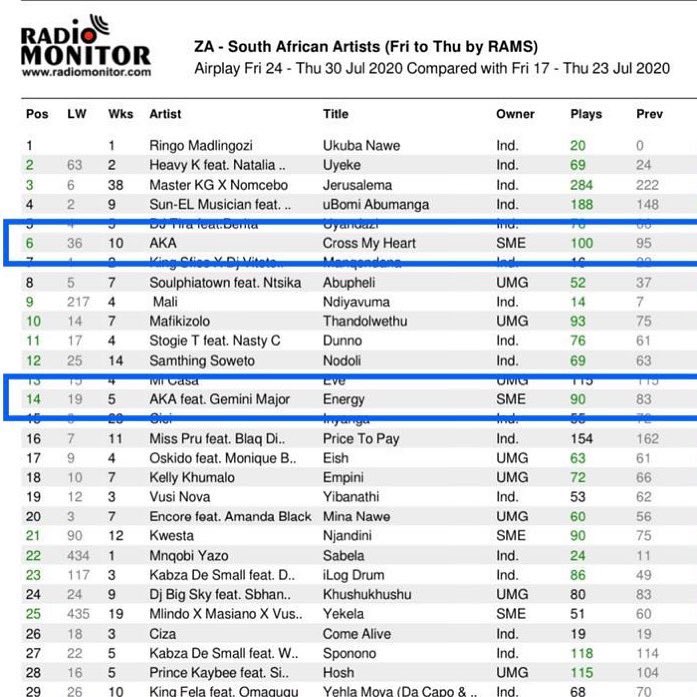 A fan of Cassper Nyovest, AKA’s most visible rival to date, commented that the tracks AKA celebrated, as well as “Energy,” the one which found no place on the charts, were nothing compared to “Good For That,” a single by Cassper Nyovest.

He insisted AKA was paying to have his songs played on radio.

Annoyed, AKA kicked at once, commanding the fan, who goes by the Twitter handle @PrinceUmuntu, to shut up his fat mouth. His next words indicated he thought of the fan as no more than a kid.

Well, what do you think of @PrinceUmuntu’s take on AKA’s new songs and AKA’s reaction? You might wish to join the conversation by dropping your thoughts in the comment section below.

Tags
AKA
John Israel A Send an email 1 August 2020
Back to top button
Close
We use cookies on our website to give you the most relevant experience by remembering your preferences and repeat visits. By clicking “Accept All”, you consent to the use of ALL the cookies. However, you may visit "Cookie Settings" to provide a controlled consent.
Cookie SettingsAccept All
Manage Privacy