A wave of exasperation is sweeping across Mzansi social media again over the pricing of DStv subscriptions. Subscribers are particularly irritated that the network arbitrarily increases prices while removing channels from particular bouquets.

A particular aggrieved fan had made a list of what it costs to be subscribed to Showmax, Netflix, Disney+, Amazon Prime and VIU, noting that the monthly subscription for all of them combined is still way lover than what DStv charges for its subscription.

Another fan noted that the day they found a platform to watch football without the cutthroat subscription fees from DStv, the network would go out of business.

And yet another urged fellow South Africans to start unsubscribing from MultiChoice, owners of DStv, because only a few channels have content (including football), but DStv continues increasing its subscription fees.

Interestingly, according to multiple sources, the MultiChoice group is facing R1 billion in losses following the decline in subscribers. One aggrieved subscriber compared MultiChoice to Nokia and Blackberry, noting the company might fail for lack of innovation and general resistance to change. You can check out some of the comments below. 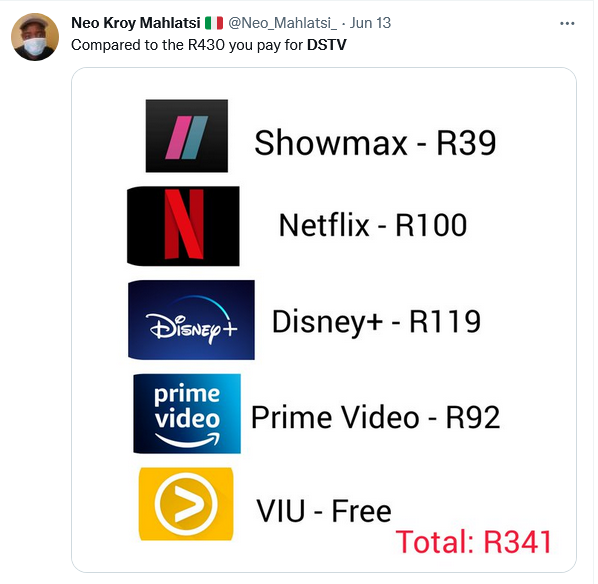 Will MultiChoice listen to the voices of protest currently ringing out in the public space? The coming days should reveal a lot. Stay tuned.

Tags
DStv MultiChoice
John Israel A Send an email 14 June 2022
Back to top button
Close
We use cookies on our website to give you the most relevant experience by remembering your preferences and repeat visits. By clicking “Accept All”, you consent to the use of ALL the cookies. However, you may visit "Cookie Settings" to provide a controlled consent.
Cookie SettingsAccept All
Manage Privacy