Here is all we know about yesterday’s APC Primaries and the fight for power in the upcoming presidential election in Nigeria.

On Tuesday, June 7, 2022, the long-awaited APC Presidential Primaries finally happened. Over 2,320 delegates were present at Eagles Square, Abuja, to screen candidates and select the party’s flag bearer for the presidential election in 2023. Of all the candidates who purchased the N100 million form, 23 were successfully screened. Some of them include:

With the President of the Federal Republic of Nigeria, Muhammadu Buhari, present at the event, the aspirants all took to the stage to speak about their plans for the country and why they should be voted for. Many aspirants stepped down for others who they claimed would do an even better job than they would and urged their supporters to vote for them.

According to reports, six aspirants stepped down and endorsed the former governor of Lagos State, Asiwaju Bola Ahmed Tinubu. The aspirant who stepped down for him include; Governor Kayode Fayemi of Ekiti State, Senator Godswill Akpabio, Professor Ajayi Borroffice, Mr. Dimeji Bankole, Senator Ibikunle Amosun, and Mrs. Uju Ohanenye. They stated that Tinubu was the right man for the job and threw their weight behind him.

Also, three presidential aspirants stepped down for the vice president, Prof. Yemi Osinbajo. They include Nicholas Felix of Miracle Church International, who contested for the presidency in 2019 on the platform of the Peoples Coalition Party (PCP). Former Senate President Ken Nnamani was among the aspirants who stepped down for Prof. Osinbajo.

Popular aspirants, including ex-transportation minister Rotimi Amaechi and pastor Tunde Bakare, stated that they were not stepping down for any of their fellow candidates and why they deserved to be president.

As the voting commenced, Vanguard reported that Bola Tinubu had jumped into an early lead ahead of the other aspirants. The report stated that Tinubu’s name was mentioned multiple times as the ballots began to be sorted by the organizers. He was trailed closely by former Transportation Minister, Mr. Chibuike Rotimi Amaechi; and Vice President Yemi Osinbajo. After 10 of the ballots had been sorted, it was reported that Tinubu had already garnered 50 percent of the votes ahead of Rotimi Amaechi, Vice President Yemi Osinbajo, and Senate President Ahmad Lawan.

APC chieftain and Chairman, Senate Committee on Independent National Electoral Commission (INEC), Kabiru Gaya, (also the Director-General of Mr. Osinbajo’s campaign organization) said in a statement to Channels television that the list of presidential aspirants in the All Progressives Congress (APC) had been reduced to two.

He revealed that the rest had stepped down but did not share their identities. According to him, the remaining two were former Lagos State governor Bola Tinubu and the Vice President, Prof. Yemi Osinbajo. The statement came hours after party governors sent the names of five southern aspirants to the President, Muhammadu Buhari, for consideration. The list included; Tinubu and Osinbajo, Ekiti and Ebonyi States governors Kayode Fayemi and Dave Umahi, and former Minister of Transportation Rotimi Amaechi.

At the end of the voting, The Asiwaju of Lagos was declared the winner and APC’s flag bearer at the 2023 presidential elections. The National Leader of the party garnered 1,299 votes, triple that of the other closer aspirants. He was closely followed by Amaechi and Osinbajo, who secured 316 and 235, respectively. See the full results below.

I am not running for President to accumulate riches, but to save the lives of ordinary Nigerians. – Rochas Okorochas#APCPresidentialPrimaries#APCSpecialConvention pic.twitter.com/dH3BlkhHOM

To our dear delegates, when you vote tonight, know that your vote carries the answer to your prayers for our country and its future. – Vice President Yemi Osinbajo#APCPresidentialPrimaries#APCSpecialConvention pic.twitter.com/3kPFdp9epH 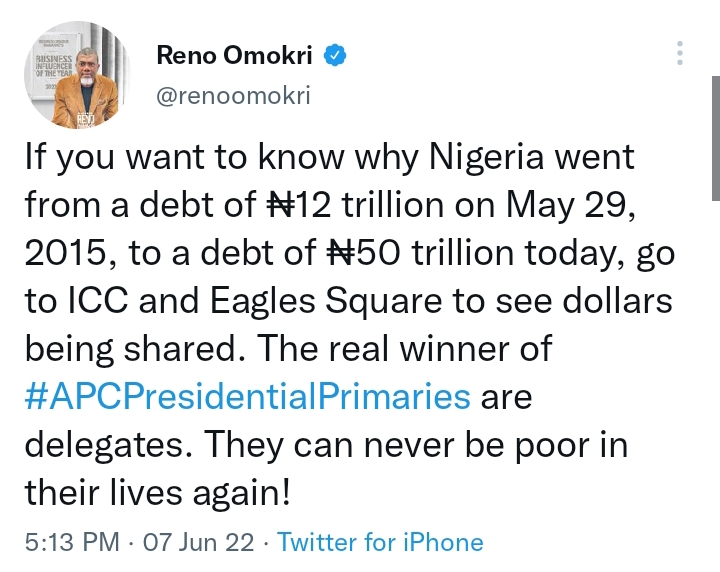 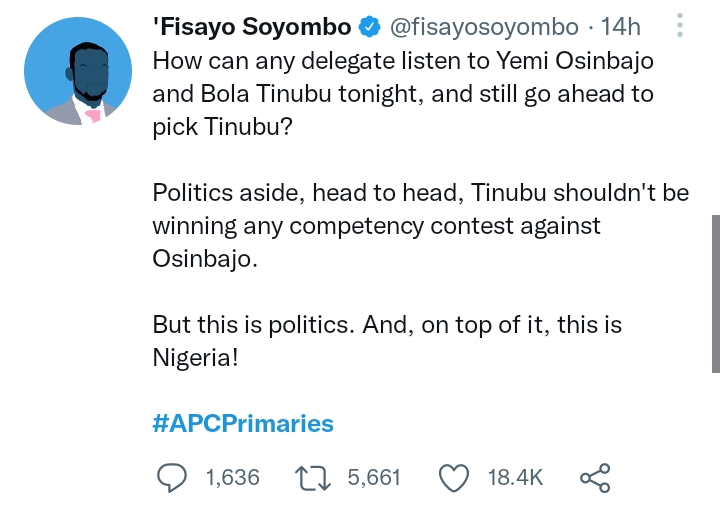 Tags
APC Bola Tinubu Nigeria Yemi Osinbajo
John Jabulani Send an email 8 June 2022
Back to top button
Close
We use cookies on our website to give you the most relevant experience by remembering your preferences and repeat visits. By clicking “Accept All”, you consent to the use of ALL the cookies. However, you may visit "Cookie Settings" to provide a controlled consent.
Cookie SettingsAccept All
Manage Privacy