A year ago, following Adele’s divorce from her then-husband, Simon Konecki, a report had suggested she had become romantically linked with the rapper Skepta. Neither she nor Skepta confirmed this at the time.

Well, a year has elapsed since that report. Now, another rumour of a possible relationship between them has poppedonline following an exchange the two celebrated artistes had on Instagram.

Recently, Adele, who had been on a massive weight loss journey, shared a picture of her in her living room. The picture attracted great commentary from the public, Skepta in the throng. In response to the picture, Skepta had joked that he now has Adele’s Instagram password.

Adele found the response comic and dropped a winking, tongue-out emoji, followed by a heart emoji. These was all fans of both artistes needed to assume they have something going on between them, Adele and Skepta. 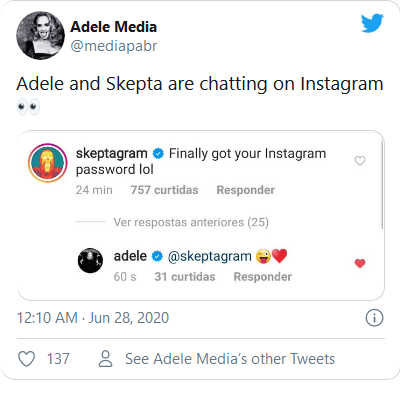 But do they? We can’t tell. We are alert, though, and will bring you more developments if their flirting “escalate,” and even they finally admit to a relationship, or deny it

Well, do you imagine the two have ignited the flint of a relationship? You may want to join the conversation by dropping your thoughts in the comment section below.