A little drama played out yesterday, Monday, June 13, during a segment dubbed #AskAMan on SABC. Now years in the running, the show brings together Somizi, Dineo, and Naked DJ.

While listeners have always had a good time listening to the presenters and having a good time, they were unimpressed with Dineo yesterday, and they urged her to learn to listen and understand because she cannot always be right.

It was a different ball game for Naked DJ, though. The songster had share pearls of wisdom on the set, and listeners loved that. For instance, he noted that a person’s peace of mind might not be in a big house but a backroom.

Those words resonated with many viewers, and they stated the same on Twitter. You can check out some of the comments below. 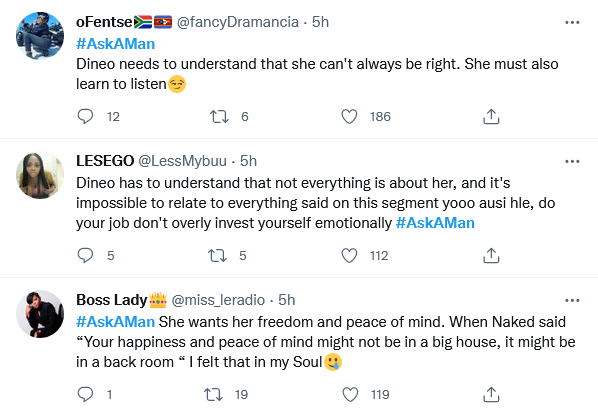 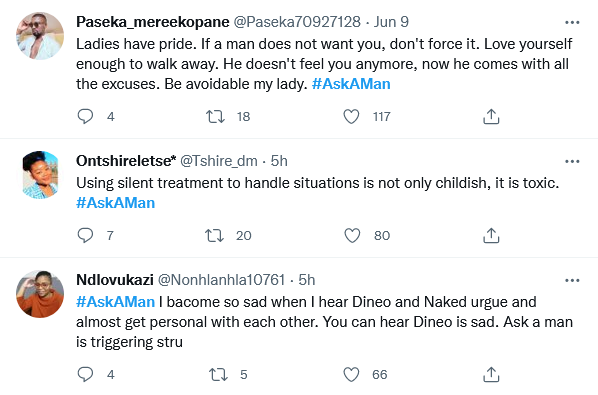 #AskAMan, a segment on the radio show The Bridge,  features Dineo Ranaka, Somizi and Naked DJ. It’s got a dedicated following both online and offline.

The broadcasting of the show had experienced technical difficulties in the past, including in early May last year (2021). The SABC had announced it couldn’t broadcast the show that morning, leading to complaints from fans who were already looking forward to what the radio hosts had in store for them.

Tags
Dineo Ranaka Naked DJ
John Israel A Send an email 14 June 2022
Back to top button
Close
We use cookies on our website to give you the most relevant experience by remembering your preferences and repeat visits. By clicking “Accept All”, you consent to the use of ALL the cookies. However, you may visit "Cookie Settings" to provide a controlled consent.
Cookie SettingsAccept All
Manage Privacy