Michelle and Keyshia Cole have ended their beef and might even release a collaborative EP soon.

The pair reportedly ended their beef in a clubhouse chat. The restoration of amity between them is prayer answered for their fans who see no reason whatsoever for the two talented artiste to fight other when they should be thrilling the world with joint projects.

Michelle announced the quashing of her beerf with Keyshia Cole in a tweet days ago, describing it as a great moment for the culture. She ended up saying they might release a joint EP, on this, though, she gave no details.

In a follow-up tweet, K. Michelle stated she is all for positivity and making great music with some great people. 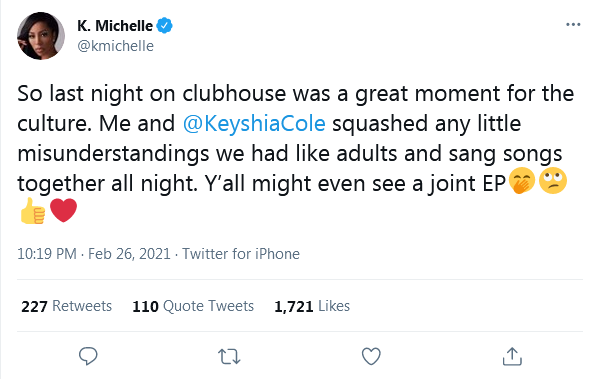 By the way, talk about a joint EP has got fans excited. It remains to be seen what the pair will eventually release – and when. A joint EP from them is actually something to look forward to. Stay tuned.

Well, what do you think of the two singers burying their beef? Are you looking forward to a collaborative EP from them? You may want to join the conversation by dropping your thoughts in the comment section below. Way to go!

Tags
K. Michelle Keyshia Cole
John Israel A Send an email 28 February 2021
Back to top button
Close
We use cookies on our website to give you the most relevant experience by remembering your preferences and repeat visits. By clicking “Accept All”, you consent to the use of ALL the cookies. However, you may visit "Cookie Settings" to provide a controlled consent.
Cookie SettingsAccept All
Manage Privacy