ThackzinDJ announced his gold triumph yesterday 5 August 2020 via his Instagram page, thanking fans for their support from day one. The win left him lachrymal – or so he made apparent with the crying emoji. It was clear from the responses that fans were enamoured of the track and still are. They were equally pleased it finally earned a gold plaque. 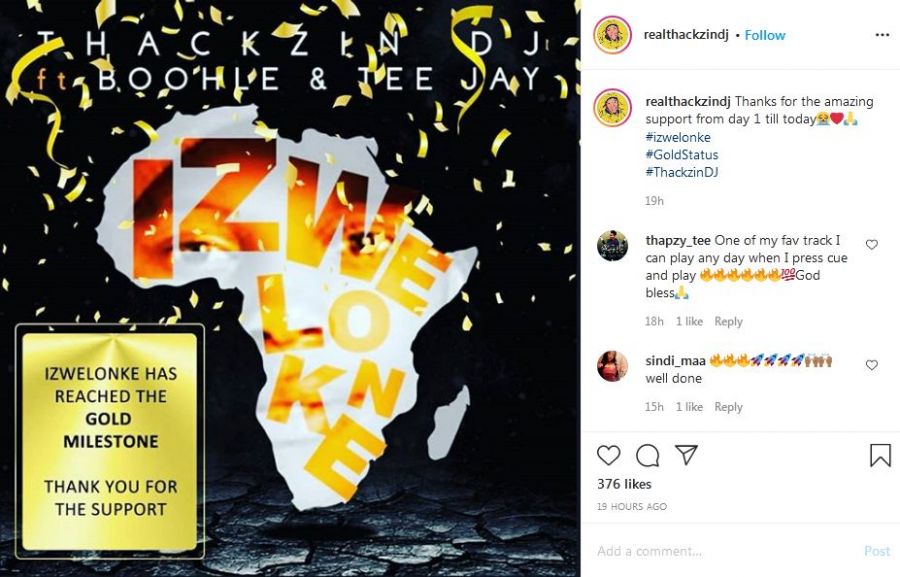 If you missed the song on release, you can listen to it below, if you please.

It may have been a year since the song’s release, but “Izwelonke” retains its charms like it has only just popped on Mzansi’s music horizon. Also, ThackzinDJ and Boohle have worked on several other songs as well.

Who, for instance, can forget Boohle’s original mix “Memeza,” which also features Teejay? Or her “Ukuhamba (Original Mix),” which has ThackzinDJ and Caras vibing with the beat as well?

One can only hope the troika of “Izwelonke” drops more numbers in the coming days. if they could win with that number, they can win with another.

How do you like “Izwelonke”  and what do you think of it going gold? You might want to join the conversation by dropping your thoughts in the comment section below.

Tags
Boohle Teejay ThackzinDJ
John Israel A Send an email 6 August 2020
Back to top button
Close
We use cookies on our website to give you the most relevant experience by remembering your preferences and repeat visits. By clicking “Accept All”, you consent to the use of ALL the cookies. However, you may visit "Cookie Settings" to provide a controlled consent.
Cookie SettingsAccept All
Manage Privacy