It is poised to be a great year, and SA Hip Hop duo, B3nchMarQ is set to have a whole lot of fun. The talented emcees have just revealed plans to drop a new album titled “Power Trip” soon.

In a post made to their Instagram page on Tuesday, January 19th, they teased the forthcoming album with a special video. The post captions revealed that the album will be dropping sometime in February but no specific date has been set for the release. At least, we are excited for the fact that it will be dropping next month.

Last time we saw them release something was in November last year. They dropped the “GQ G-Mix” joint featuring Flvme, Die Mondez, Maggz, and YoungstaCPT. We can’t even deny the fact that it was a true masterpiece. It would be nice to hear the new joints they’ve cooked up for the year. 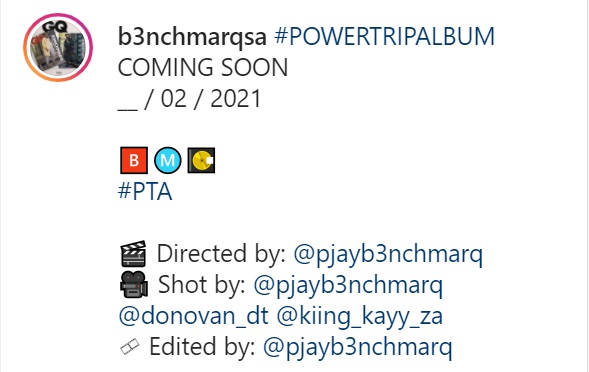 Tags
B3nchMarQ
John Jabulani Send an email 19 January 2021
Back to top button
Close
We use cookies on our website to give you the most relevant experience by remembering your preferences and repeat visits. By clicking “Accept All”, you consent to the use of ALL the cookies. However, you may visit "Cookie Settings" to provide a controlled consent.
Cookie SettingsAccept All
Manage Privacy