What exactly is going on in Babes Wodumo’s relationship with her husband Mampintsha? This question has been coming in torrents after another clip of her kissing another male “bestie” emerged.

The mother of one had previously been recorded kissing a man who was described as her best friend. She kissed him on the mouth and fans were shocked.

As far as most of them were concerned back, kissing on the mouth should be something reserved for her husband. It appears Babes has other ideas and she has no apologies for pushing them forward.

Well, that’s what comes to mind right now following another kissing scene involving another man. This time, the clip was shared by Babes Wodumo herself on her Instagram page, which is followed by approximately 2.4 million people. You can check out the video below. 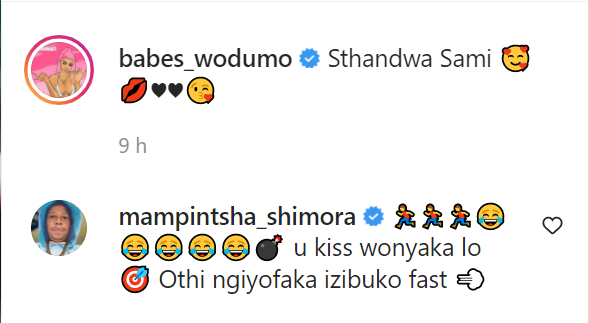 By the way, both videos come several weeks after Mampintsha shared on Facebook that he’s looking for a top chef because he’s keen on changing the way he eats. At the time, speculations had been rife that he and babes were having trouble in their union.

So far, though, there’s no evidence that Babes and Mampintsha are planning to separate. Stay tuned if you please.

Tags
Babes Wodumo
John Israel A14 March 2022
Back to top button
Close
We use cookies on our website to give you the most relevant experience by remembering your preferences and repeat visits. By clicking “Accept All”, you consent to the use of ALL the cookies. However, you may visit "Cookie Settings" to provide a controlled consent.
Cookie SettingsAccept All
Manage Privacy