Everyone in Mzansi has loved how private Babes Wodumo has been with her son, Sponge Wondumo. Last year, the Gqom Queen welcomed her bundle of joy to major praise from all over the country. It has truly been nice to see a different side to her ever since the birth of the adorable boy.

While we have not seen his face, we know he looks really cute. Babes is one of many Mzansi celebs who have chosen not to show their child’s face on social media. All the photos she has posted of him, she has covered his face with something, and left only a little part of it.

Last year, the “eLamont” star tied the knot with the love of her life, former Big Nuz member, Mampintsha. She married him while she was heavy with Sponge. Both seem to be great at being parents because they have successfully kept their son away from the public eye.

Babes recently took to social media to share a lovely snap of Sponge’s cute face. As usual, she did not reveal the entire face. Check out the cute photo below. 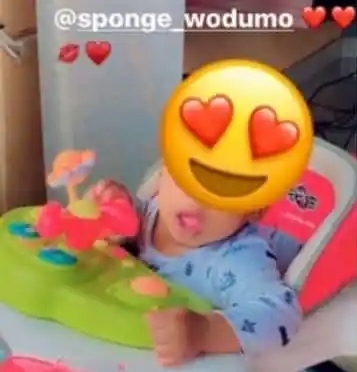 Tags
Babes Wodumo
John Jabulani Send an email 12 February 2022
Back to top button
Close
We use cookies on our website to give you the most relevant experience by remembering your preferences and repeat visits. By clicking “Accept All”, you consent to the use of ALL the cookies. However, you may visit "Cookie Settings" to provide a controlled consent.
Cookie SettingsAccept All
Manage Privacy