Black Coffee’s first Grammy Award win was a source of great excitement in South Africa, and many commended him for that career milestone.

Interestingly, while others were celebrating with the international DJ and producer, Heavy K spent the same period correcting what he said were wrong comments made about him by MacG of Podcast and Chill. The podcast host had claimed that Heavy K had described Black Coffee’s Grammy-winning album, “Subconsciously,” as pap

Reacting to that claim, Heavy K made it clear that he never said au h about the album. To support this, he also shared a snippet from the interview and his conversation with Black Coffee about it.

He asked MacG to apologise from the same platform he’d lied, but MacG G wasn’t having it. He described Heavy K as a narcissist in a clip which you can check out below.

"My son is fighting for his life in a hospital bed – what's more important, my son or Heavy K's ego?" asks the controversial podcaster 😪

Fans thought MacG was in the wrong, however, and they called him out for failing to apologise after telling a lie about the Drum Boss.

And for those who might think he’s developed a beef with MacG as a result, Heavy K made it clear in a tweet that he’s back to work and has no time to beef anyone. 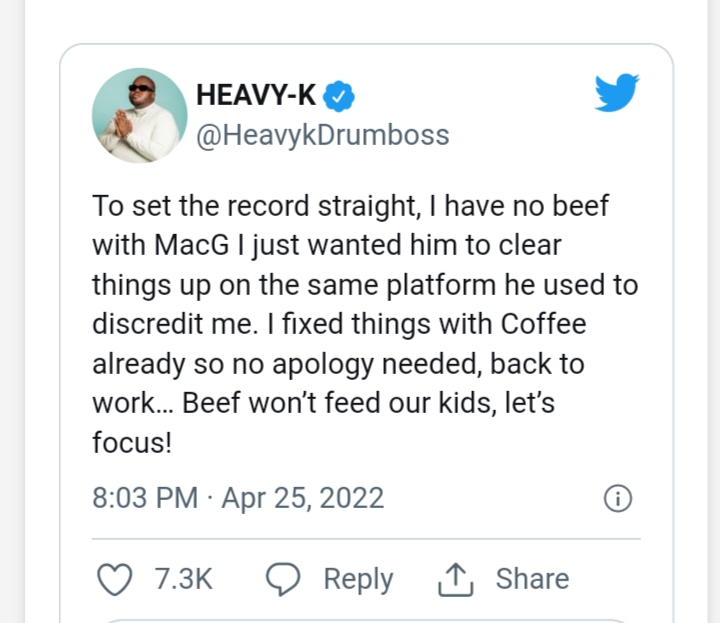 Tags
Heavy K MacG
John Israel A Send an email 26 April 2022
Back to top button
Close
We use cookies on our website to give you the most relevant experience by remembering your preferences and repeat visits. By clicking “Accept All”, you consent to the use of ALL the cookies. However, you may visit "Cookie Settings" to provide a controlled consent.
Cookie SettingsAccept All
Manage Privacy