It’s just a few days to the unveiling of a winner of the reality show Big Brother Mzansi, and Gash1 and Themba are in the spotlight again. Both are among the favourites to win.

It appears like the two are only just now revealing little known aspects of themselves – they have no f..s to give.

But is that why Mpho Wabadimo is angry?

Gash1 had claimed that Mpho was angry with him and Themba and might be writing a suicide note. He also expressed the view that Libo might have snitched on them (Gash1 and Themba).

Gash1 says Mpho may be writing a suicide note and thinks Libo snitched on them(Gash1 and Themba) that’s why Mpho is angry. #BBMZANSI

With the end of the reality show pretty close by, it’s like every man to himself, with each at the last angle of their game.

Interestingly, Libo, who had earlier accused Mpho (a sangoma or traditional healer) of practicing witchcraft, is now chummy with her and Gash1 and Themba, hot in the running for the R2 million cash prize, are back to clowning.

Some viewers of the show think that the bond between the two – or having just two of them in the same spot is nothing but trouble. And yet others believe the two are the “content” in the Big Brother Mzansi house. Here’s what viewers are saying. 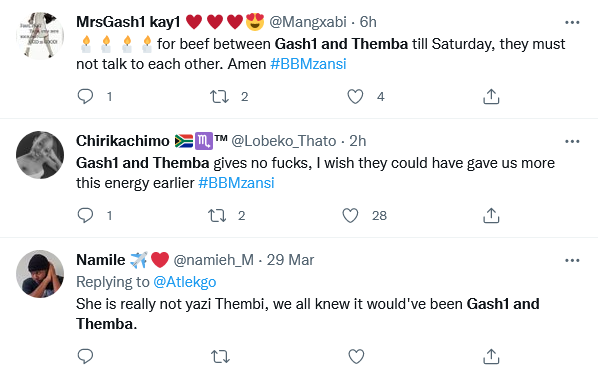 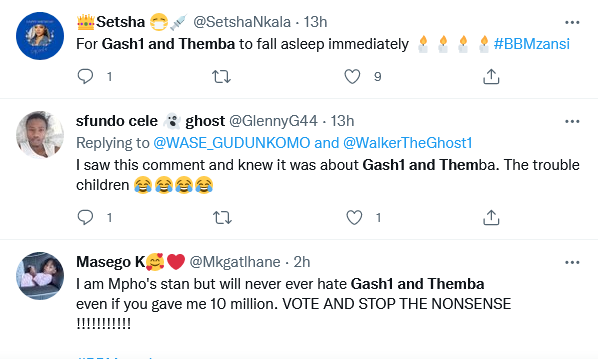 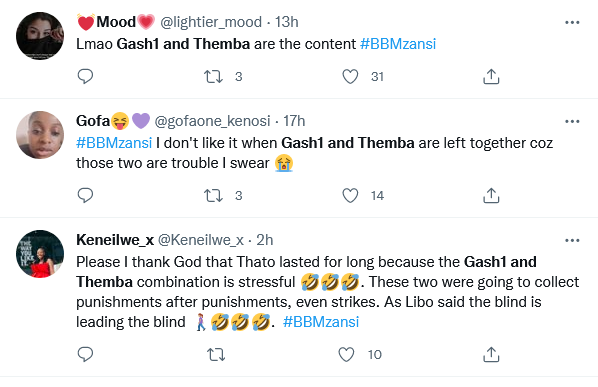 Tags
Big Brother Mzansi Gash1 Themba
John Israel A Send an email 31 March 2022
Back to top button
Close
We use cookies on our website to give you the most relevant experience by remembering your preferences and repeat visits. By clicking “Accept All”, you consent to the use of ALL the cookies. However, you may visit "Cookie Settings" to provide a controlled consent.
Cookie SettingsAccept All
Manage Privacy