Big Brother Mzansi has been running for a couple of weeks now, and a number of housemates have been basically living on the trend table and making the rounds on social media.

Themba and Nale are names that are no strangers to the social media trends, as the pair have had a somewhat romantic tension existing between them for a while now. They recently found some sit-down time, where they got real and honest with each other in a heart-to-heart conversation.

Nale raised the issue of feeling threatened by Thambe when he wouldn’t quit randomly popping up to tell her “be careful” for no justifiable reason. Thambe realized his errors and lost no time to apologize like a gentleman for coming off as threatening. Fans also weighed in on Twitter, throwing in their 2 cents. Some think there was nothing to be taken seriously about being told ‘be careful’, others just want Nale to mind his business and keep away from Thambe, while some others really think that their friendship is about to hit the rocks. 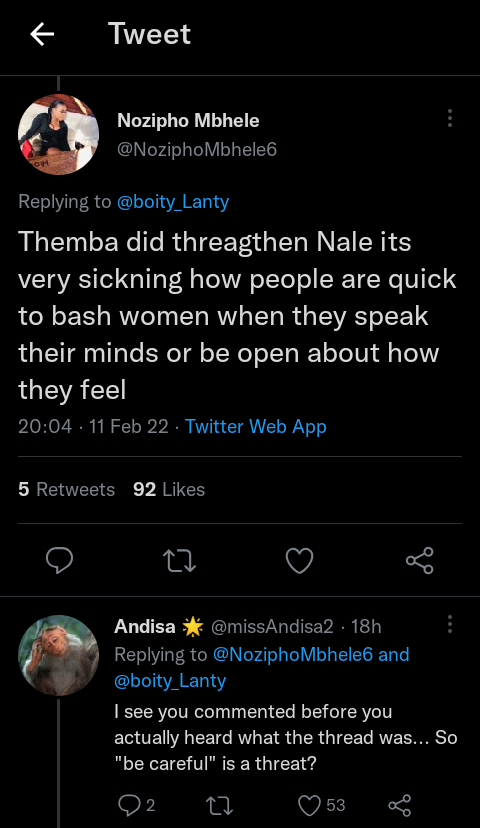 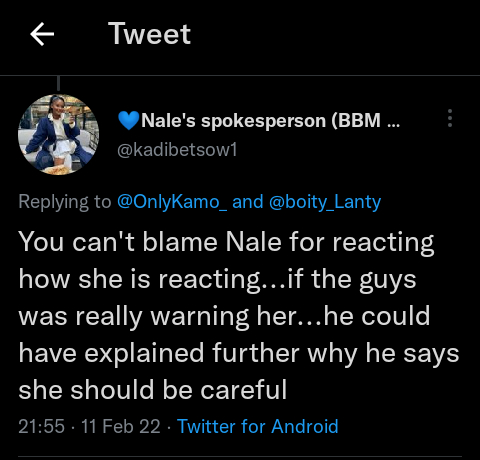 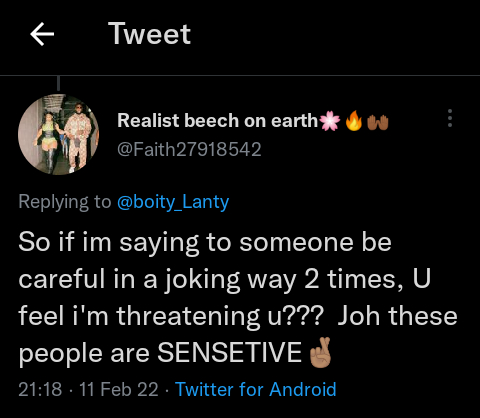 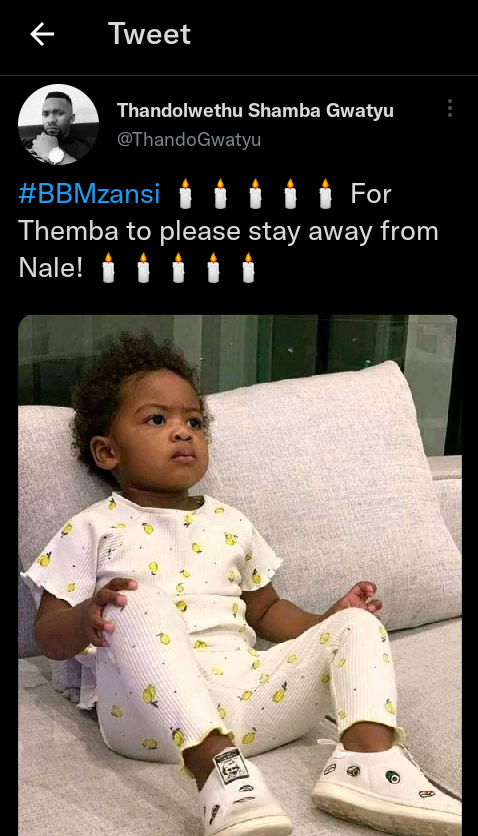 Venus has also been another trending name, as she has been serving hot content to viewers. In addition to her habit of having conversations with herself which has garnered so many funny reactions, her new relationship with BU has also set e-tongues wagging on social media. Many are in love with their love and want it to prosper. So far there hasn’t been any negative reactions. Venus was also caught on cam eavesdropping when the boys were having a conference of some sort. 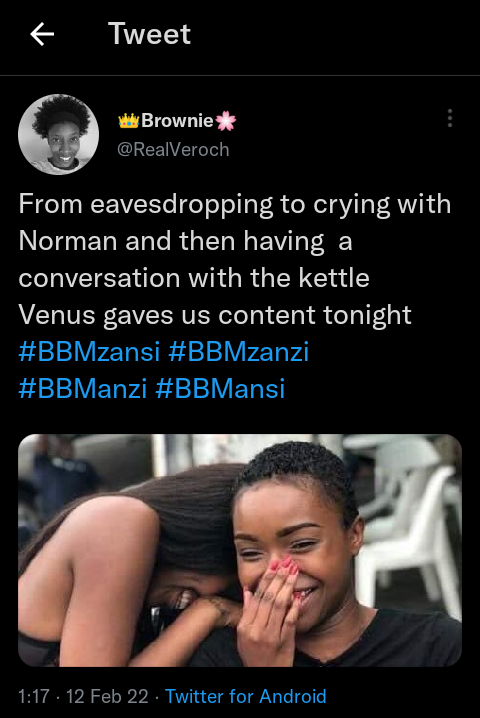 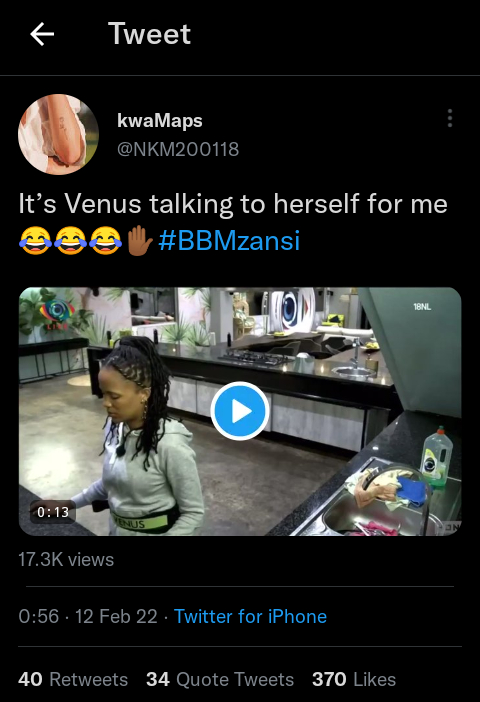 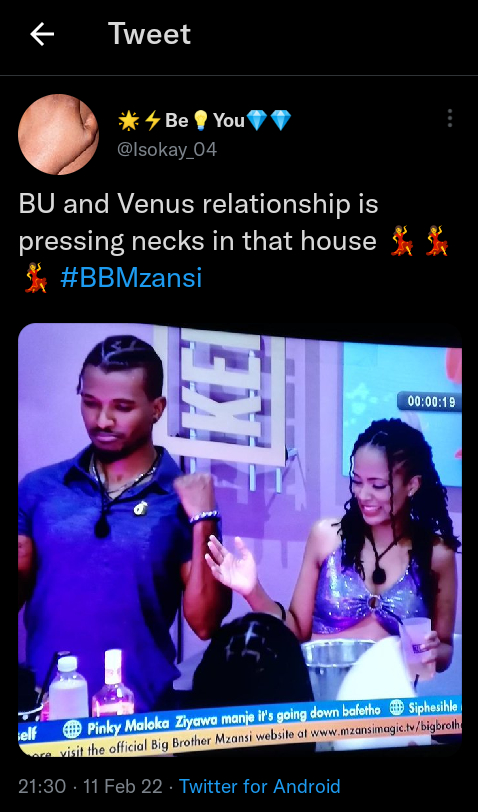 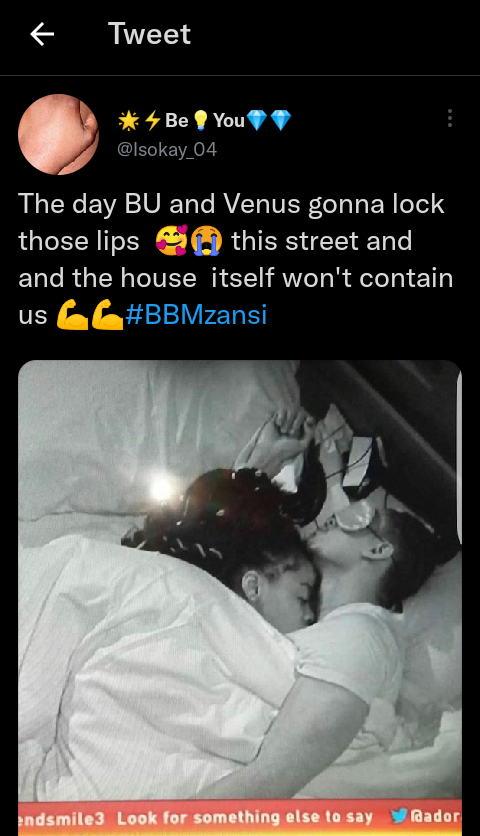 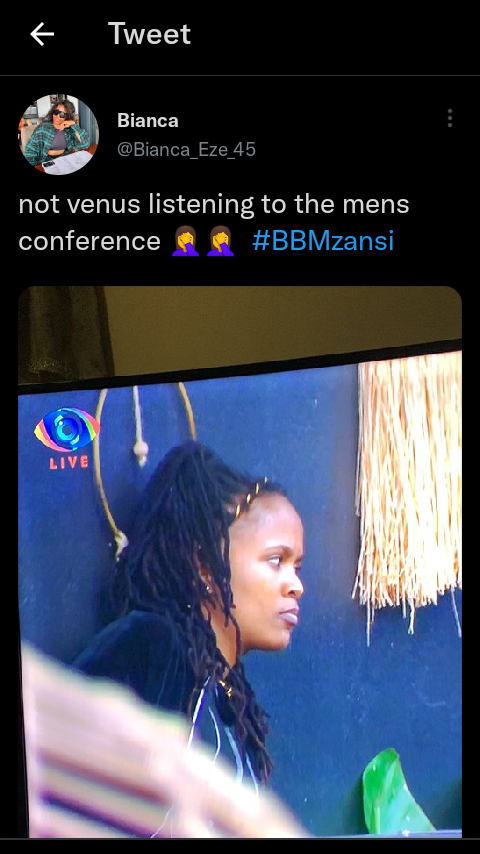 Yoli, who was recently made the deputy head of house, has been amongst the most talked about, fans gush about her and her leadership style. She is also loved for her attractive free-spirited persona. Fans also had her back online when she broke down in tears following the show of disregard she received from   and  while she gave out instructions for a certain task. Many really think she is an all-round great and entertaining character for the reality show. 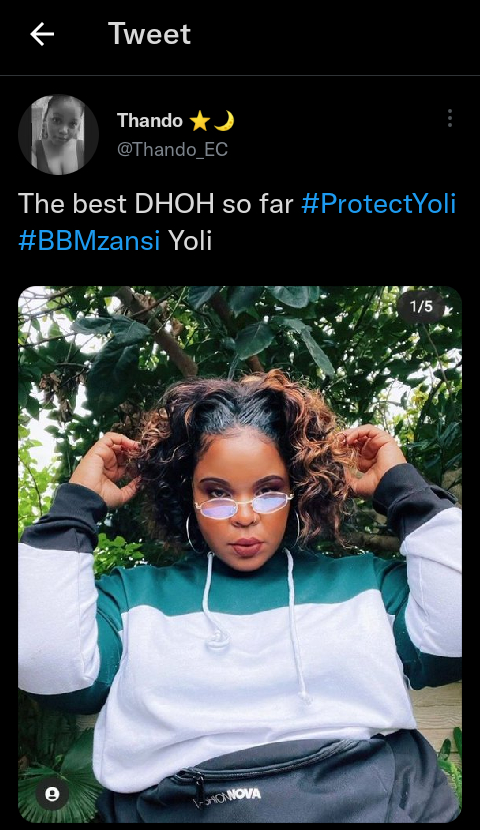 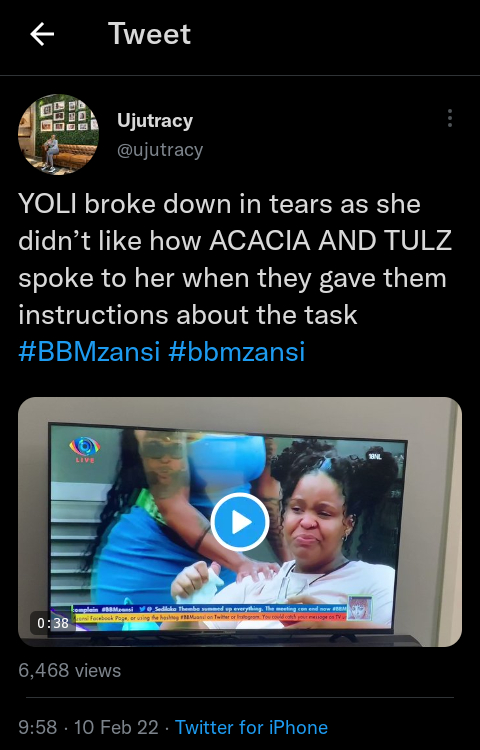 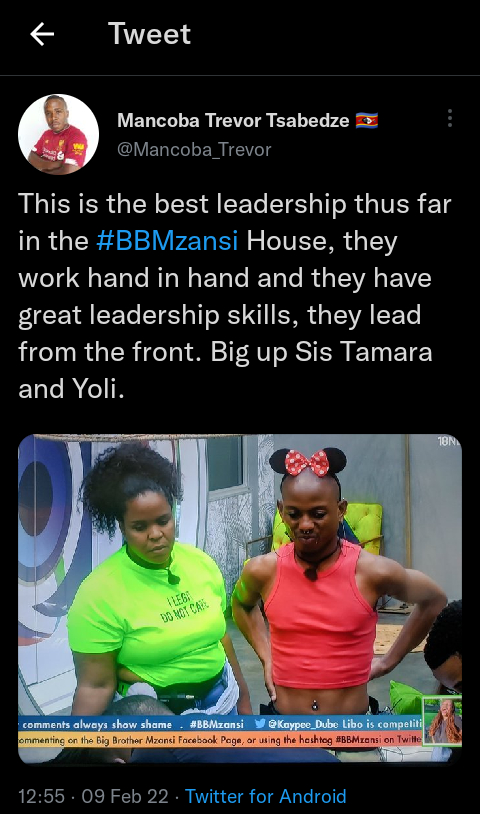 Libo’s name also has reason to be amongst the trending on socials, as his relationship with Mpho has most people talking ever since they shared a kiss. Fans appear to actually love what’s going on between those two and want it to continue. Libo has also been a topic of discussion since he started leaking some of the content of the conference held by the guys in the house, seeing as he had noticed Gash1’s interest in Mpho. Here are some fan reactions on Twitter: 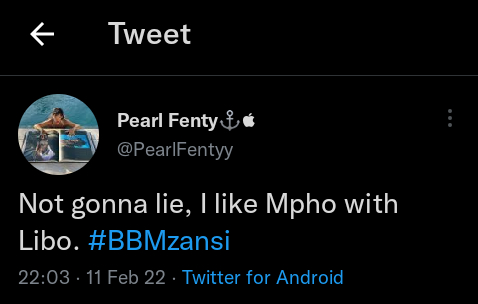 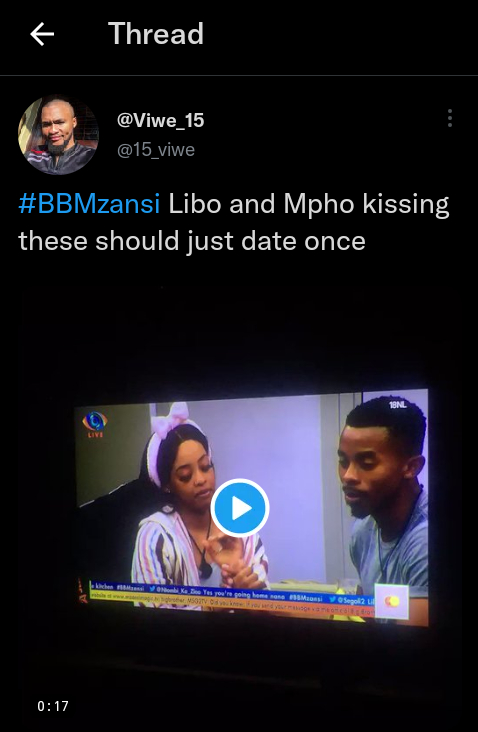 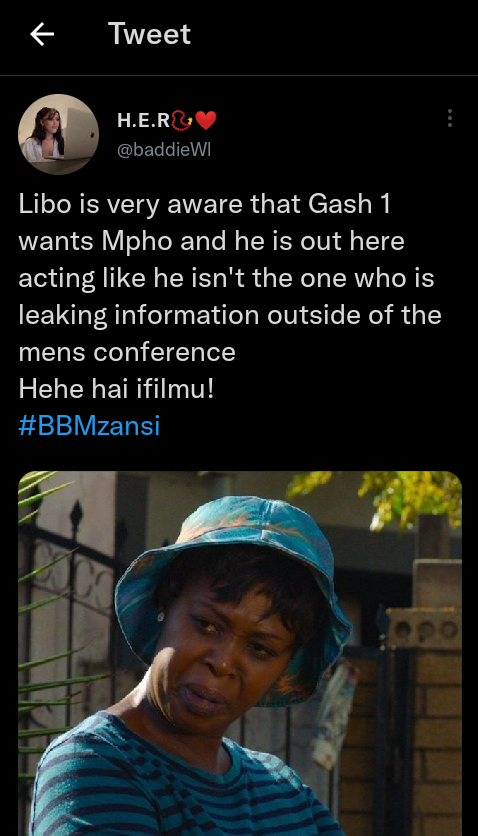 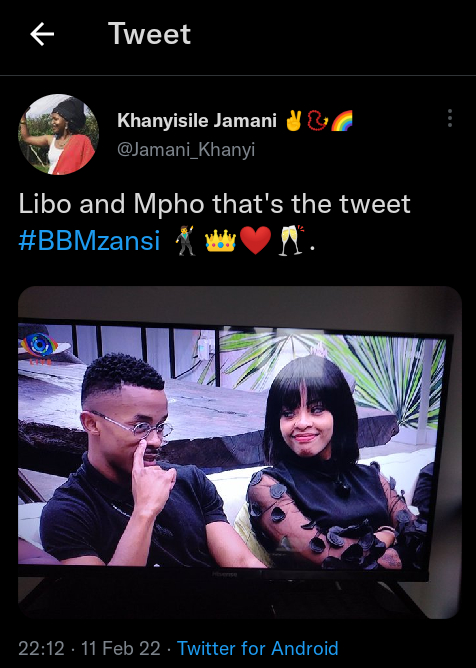 Tags
#BBMzansi Big Brother Mzansi
Ikedichim Chibundu Send an email 12 February 2022
Back to top button
Close
We use cookies on our website to give you the most relevant experience by remembering your preferences and repeat visits. By clicking “Accept All”, you consent to the use of ALL the cookies. However, you may visit "Cookie Settings" to provide a controlled consent.
Cookie SettingsAccept All
Manage Privacy