Saudi reacts to his relationship with A-Reece and says they are better off divided.

The drama that follows SA Hip Hop is just crazy. A lot of times, we realize that there is no real love in the game, just people looking out for themselves.

Former Ambitiouz Entertainment artists, A-Reece and Saudi used to be cool with each other until rumours of a feud between them broke. However, Saudi denied this once in a tweet, saying the only thing that went wrong between them is just “rap politics”. That has been the same for a lot of friendships in the SA rap game.

Reacting to a tweet from a tweep suggesting they collaborate on a hit again, the “Shooters” hit maker stated that they are better off divided. He also revealed that he had tried reaching out to the “Paradise” star but it has all proved futile. Check out the full tweet below. 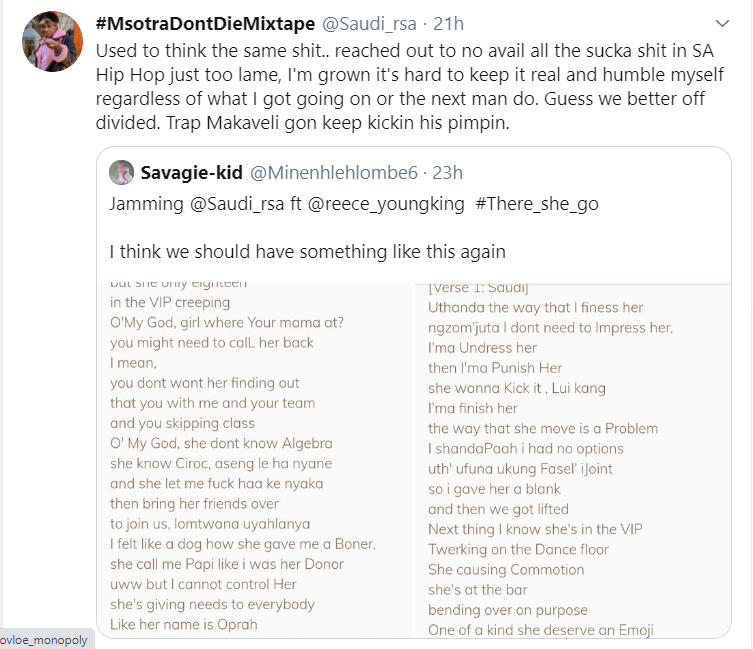 Tags
A-Reece Saudi
John Jabulani Send an email 14 September 2020
Back to top button
Close
We use cookies on our website to give you the most relevant experience by remembering your preferences and repeat visits. By clicking “Accept All”, you consent to the use of ALL the cookies. However, you may visit "Cookie Settings" to provide a controlled consent.
Cookie SettingsAccept All
Manage Privacy