“Jerusalema” is becoming Limpopo artiste Master KG’s biggest hit yet. According to famous South African disc jockey Black Coffee, there is massive request for the song in Switzerland.

He made this known in a recent tweet showing partygoers in a club in the country. One of the partygoers had a phone with the song playing. The atmosphere was one of joie de vivre, undeniably convivial. 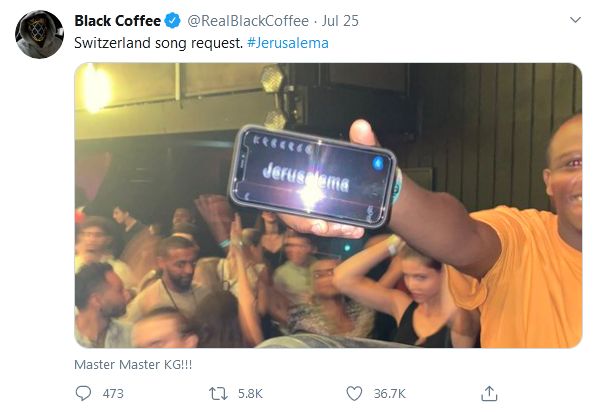 “Jerusalema” failed to earn a nomination in this year’s South Africa Music Awards (SAMA), provoking outrage from the RainbowNation. The argument has been that if there was any song that ought to have been nominated for a SAMA, it ought to be Master KG’s song, which is not only a hit in South Africa but other countries around the world, most recently Switzerland.

By the way, the success of “Jerusalema” has provoked aremix featuring Nigeria’s afrobeat star Burna Boy. But the remix apparently lacks the global charm of the original.

Well, what do you think of “Jerusalema” becoming a hit in Switzerland? You might wish to join the conversation by dropping your thoughts in the comment section below.

Tags
Black Coffee Master KG
John Israel A Send an email 27 July 2020
Back to top button
Close
We use cookies on our website to give you the most relevant experience by remembering your preferences and repeat visits. By clicking “Accept All”, you consent to the use of ALL the cookies. However, you may visit "Cookie Settings" to provide a controlled consent.
Cookie SettingsAccept All
Manage Privacy