We love the fact that the year is still going to be more amazing than it has been on the music scene. While there has been an incessant rain of new albums, there is so much more to come. One of the most anticipated is Black Coffee’s forthcoming project “Subconsciously”.

The “Lalala” has still not revealed the release date for the album but we are certain that it will be dropping soon. He has dropped a few songs off the project including “SBCNCSLY” featuring Sabrina Claudio, “I’m Falling” featuring Ryx, and “10 Missed Calls” featuring Pharrell Williams & Jozzy.

The popular DJ recently shared the full tracklist for the album. It features a total of 12 tracks including the previously released songs, and contributions from both local and international artists. They include Cassie, Tellaman, Una Rams, Sun-El Musician, Celeste, Msaki and more. We can’t wait for a release date. 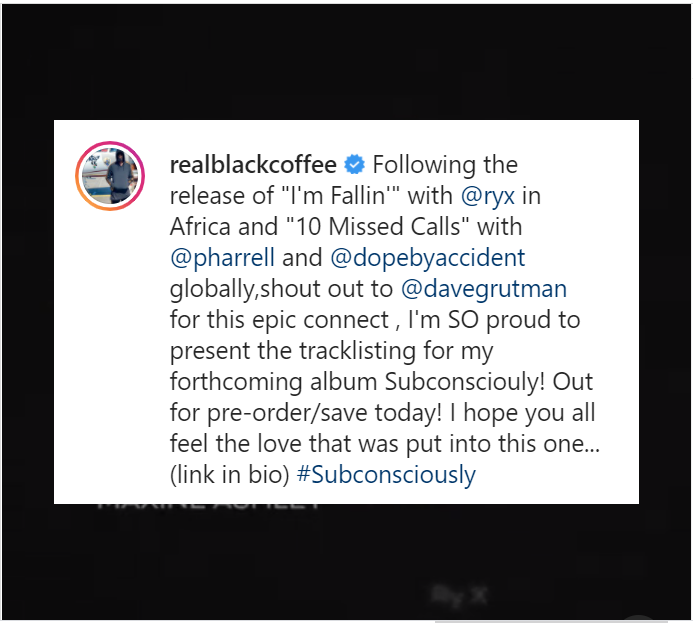 Tags
Black Coffee
John Jabulani Send an email 23 November 2020
Back to top button
Close
We use cookies on our website to give you the most relevant experience by remembering your preferences and repeat visits. By clicking “Accept All”, you consent to the use of ALL the cookies. However, you may visit "Cookie Settings" to provide a controlled consent.
Cookie SettingsAccept All
Manage Privacy