It was to have been a jocund break on Twitter yesterday, 7 August 2020, when Black Coffee tried to initiate a conversation on who and who are currently on a celeb’s case. Well, it appeared someone somewhere was actually minding Black Coffee’s business, and when she made this known in form of questions, the celebrated DJ and producer flared up.

Perhaps when he asked to play twister with his fans, he wasn’t expecting them to smash the game on his head. You can check out his tweet below. 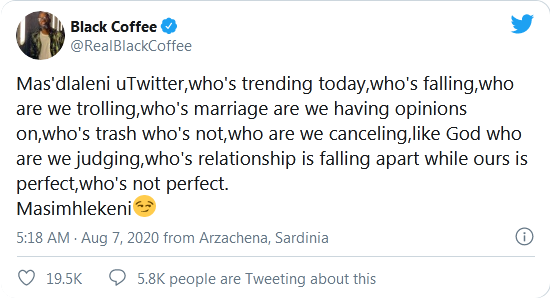 To this tweet a lady had responded, asking if fans can laugh and just have a good time without having to do all Black Coffee asked for in his tweet. She then asked if he doesn’t miss his ex-wife, Enhle Mbali. She concluded by asking him for tips on how he managed to get over her.

Those questions provoked Black Coffee, who has been engaged in a protracted legal battle with Enhle Mbali’s lawyers over alimony, to wrath. Check out his response in the screenshot below.

What do you think of the lady’s question and Black Coffee’s reaction? You might want to join the conversation by dropping your thoughts in the comment section below.