The #UmlandoChallenge might be the in-thing in South Africa right now, but it has failed to impress celebrated international disc jockey Black Coffee.

The songster of the “Drive” fame had been asked by a fan when he would be returning to the country, and Black Coffee has responded that he wouldn’t be coming back until the rainbow was done with the challenge.

The challenge, which was spawned by an amapiano song of the same title, encourages people to twerk (shake their waists) and share pictures and videos of the same on Instagram.

Several South African musicians and ordinary folk alike have jumped on the challenge, including lady DU, Young Stunna, and the Kalawa Jazmee Records boss Oskido, who has a very close relationship with Black Coffee. 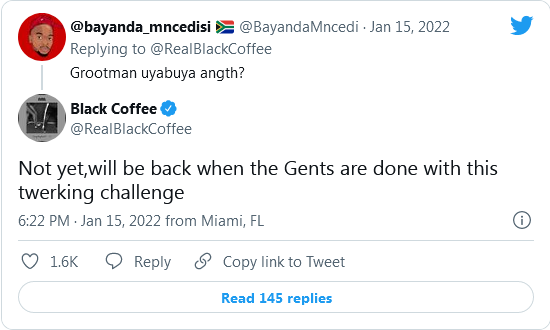 By the way, Black Coffee is one of the most visible South African musicians on the international music scene. He’s also one of the most successful, with a network that encapsulates the likes of Drake, Beyoncé, and Jay-Z.

Black Coffee was recently nominated for a Grammy award, a significant milestone that provoked celebration in South Africa and beyond. But Mzansi won’t be seeing him until the Umlando thing is over. Well, can you beat that?

Tags
Black Coffee
John Israel A Send an email 19 January 2022
Back to top button
Close
We use cookies on our website to give you the most relevant experience by remembering your preferences and repeat visits. By clicking “Accept All”, you consent to the use of ALL the cookies. However, you may visit "Cookie Settings" to provide a controlled consent.
Cookie SettingsAccept All
Manage Privacy