Mzansi rapper Blxckie will be joining the American duo EarthGang for their BiodeghettableTour later this year.

He admitted he’s both excited and grateful to be part of the tour and to be going abroad. You can check out his post below. 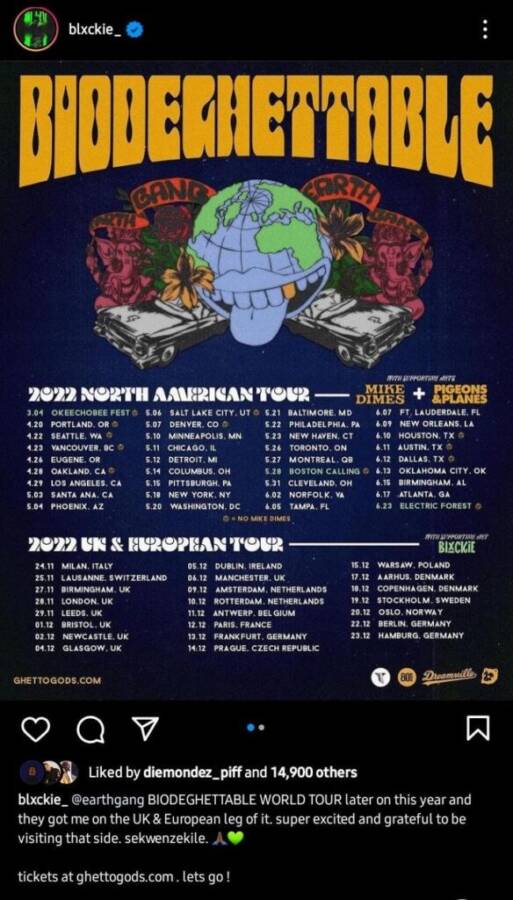 This is the first time the South African rapper will be touring with EarthGang, so the adventure means a lot to him. From the responses to his post, it was clear that his fans were just as chuffed he’s be joining EarthGang for a tour.

Before the tour, later this Friday, EarthGang will be releasing a new album titled “Ghetto Gods.” Already, from that project, three songs have been released, including “Amen.”

It cannot be determined why the Atlanta duo elected to bring Blxckie on board as they go on tour, but then Blxckie’s musical appeal is not in doubt. From an obscure artist, Blxckie has rapped his way into the mainstream and he’s today fondly called one of the princes of South African rap.

Tags
Blxckie
John Israel A Send an email 23 February 2022
Back to top button
Close
We use cookies on our website to give you the most relevant experience by remembering your preferences and repeat visits. By clicking “Accept All”, you consent to the use of ALL the cookies. However, you may visit "Cookie Settings" to provide a controlled consent.
Cookie SettingsAccept All
Manage Privacy