Does Boity sound similar to Family Tree rapper Cassper Nyovest? Some fans think so and have been dragging her online, describing her bars as weak.

One particular fans, who goes by the Twitter handle @WonderMahlobo, stated that Boity’s bars indicated she once dated the Family Tree boss. Amused by the criticism, the songstress had laughed it off.

In response she had stated that the fan actually thinks so because she (Boity) was rapping and getting rich. This has led to an interesting debate online, which is still ongoing 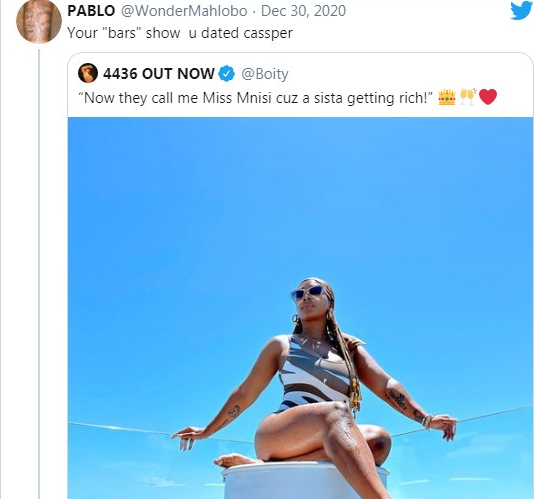 The criticism follows Boity’s release of her debut project titled “4436,” which she revealed as the number of her grandmother’s house. She had lived with her grandmother at some point and decided not only to immortalize the address of her house but reference her as well.

By the way, no one knew what was coded in her “4436” title until Boity revealed it to the world. The revelation surprised many.

What do you think of the criticism that Boity’s bars are weak and similar to those of Family Tree rapper Cassper Nyovest’s? Do you agree with the criticism? You might want to join the conversation by dropping your thoughts in the comment section below.