It is common knowledge that no musical artiste begins from the top. As in no one appeared on the scene famous. Everyone was an unknown figure once upon a time.

You may put Mzansi’s Boity on the list. The “Wuz Dat” hitmaker has come a long way, from total obscurity to fame. Now she can only reflect in gratitude at the trajectory of her music career.

It’s been one victory after the other for the singer who recently got in a booze brawl following the opening of liquor stores across South Africa.

Her recent appearance on Billboard Magazine made her pause briefly and reflect on Instagram. According to her, she is proud of the woman she has become. In fact, at this point in her career, she has advanced beyond her craziest dreams. 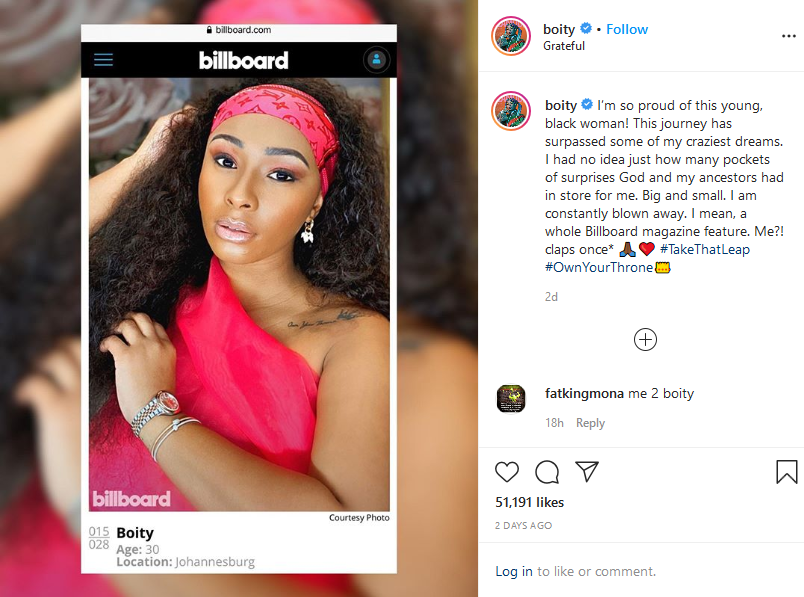 She shared a clip of her performance that prompted her signing to Def. She commented that the universe will always reward those who follow omens and pursue their purpose. Her life is a sterling example, after all

If anyone told me that this moment would lead to me being signed to an international record label, I would’ve laughed and told them it’s not possible. The Universe will always reward you for following it’s omens towards your purpose. Whatever your passion, your dream… chase it relentlessly. See where it takes you. ❤️ #OwnYourThrone👑

She wasn’t expecting the trajectory her career would take. That performance changed her story. The gods and ancestors had been kind on her. If someone had told her of the store of surprises they had for her, she would of course have doubted them.

She ended her reflections clapping for herself and urging her fans to takes risks. You know, #TakeThatLeap.

What do you make of Boity’s reflections?  You may want to listen to her story and “Our Your Throne.”