With Valentine’s Day fast approaching, people out there are making a list of things they would love to be gifted in what has been recognized globally as a day of love.

Not only are ordinary peeps making lists of expectations, celebs are doing just the same. The latest celeb to state what she would love for Valentine’s Day is Mzansi rapper Boity. According to the “Wuz Dat” muso, She isn’t fussy in her need for a Valentine gift.

A Twitter fan, who goes by the handle @Dumisani_ZA, had asked her “o batlang ka Valentine’s?” and Boity had responded that she would need just R200k for Valentine’s Day.

Her post generated mixed reactions from her fans. Some commended her for been straightforward in her demand. Some thought she was merely joking and yet some asked her for her account number so that they can credit her. Last we checked, she had not released her account number to those who asked.

You can check out the tweet, which has spawned an interesting discussion online,  below. 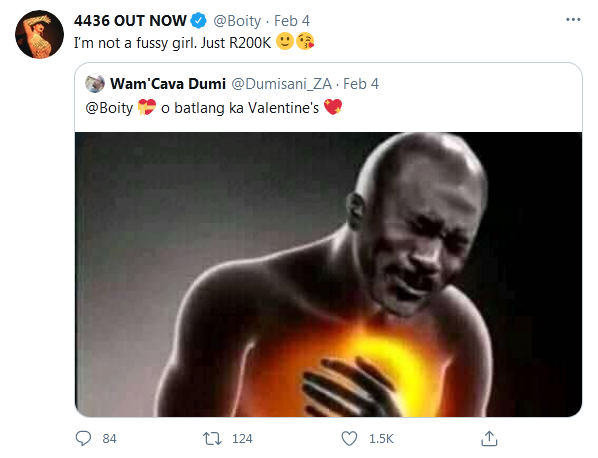 Well, what do you think of Boity’s Valentine’s Day request, though? You might want to join the conversation by dropping your thoughts in the comment section below.

Tags
Boity
John Israel A Send an email 5 February 2021
Back to top button
Close
We use cookies on our website to give you the most relevant experience by remembering your preferences and repeat visits. By clicking “Accept All”, you consent to the use of ALL the cookies. However, you may visit "Cookie Settings" to provide a controlled consent.
Cookie SettingsAccept All
Manage Privacy