Some peeps are actually ambitious in their requests, especially from their idols. Others are not quite so. One of Boity’s fans is clearly in the ambitious league.

The fan, who goes by the Twitter handle @oratilweor, had asked the “Wuz Dat” rapper to buy her an iPhone. The tweet had a couple of crying emojis, which might indicate the seriousness of the request. Perhaps not.

An amused Boity had stated in response that she doesn’t have children yet. In other words, she cannot take responsibility for the phone needs of someone not from her womb. 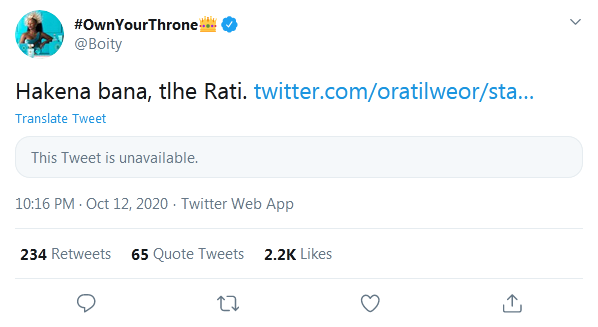 The tweet has since been deleted. However, some fans think she was rather harsh in her response to the fan.

By the way, iPhones are among the choicest phones in the world right now. They are status symbols virtually everywhere, from South Africa to China. However, not every celebrity fancies this brand from Apple.

For instance, Family Tree boss Cassper Nyovest is a notable user of Android, the biggest rival to the iPhones (which runs on iOS) to date.

Well, what do you think of the request for an iPhone and Boity’s reaction? You might want to join the conversation by dropping your thoughts in the comment section below.