The House of BNG boss was locked in a battle with Rea Gopane, who had made some claims about her, including that she had introduced her ex-boyfriend AKA to drugs.

At some point in the conflict, Rea Gopane had tendered a public apology. But he’d gone back to making claims against Bonang, who wasted no time suing him for damages.

The case dragged on last year and then 2021 was over. Somehow, some peeps had thought that the case had died with the year. But Bonang announced earlier this year that courts were opening, which was more of a subtle threat to Rea.

It turned out it was a real threat, after all, as the case not only resumed but judgment was also given in Bonang’s favor.  A Johannesburg high court had ruled that Gopane should pay R300k in damages, as well as the legal costs of the case.

An excited Bonang had released a statement following her victory, noting that the judgment is a lesson to individuals who may want to follow the same path as the YouTuber. 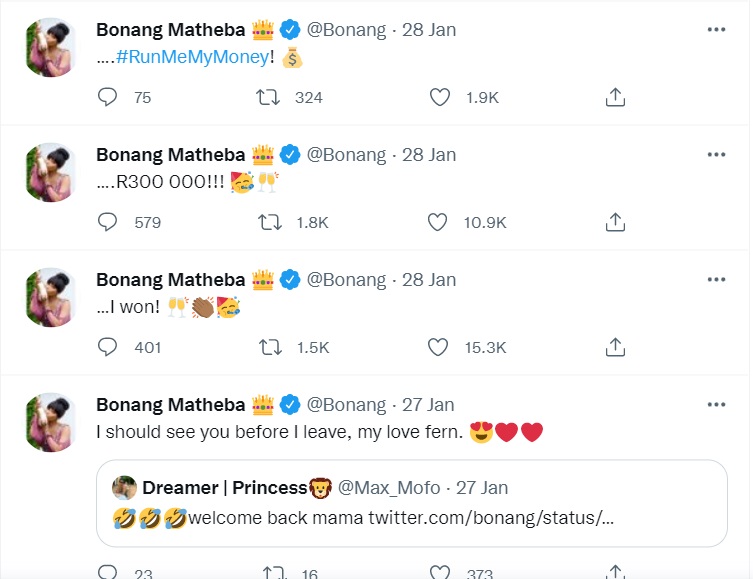 It is with a great deal of humility that I acknowledge and welcome the vindicating and ground-breaking ruling by Judge Malindi of the High Court of Johannesburg, South Africa on 27 January 2022.

Following several false and defamatory attacks on my reputation by a certain Mr Gopane, and only after two written requests to desist which were ignored, I instituted an action for compensatory damages in the Johannesburg High Court.

After hearing argument relating to the unlawful conduct of Mr Gopane the court upheld my claim for damages, and in a precedent setting judgment, ordered that Mr Gopane pay damages in the amount of R300,000 plus the legal costs of the action.

I trust that this judgment be a lesson to individuals like Mr Gopane that there are consequences for abusing public platforms to defame and humiliate others. It is important that particularly as women our voices are used constructively to ensure that cyber bulling, untrue and inflammatory attacks on any individuals reputation are not tolerated.

It is not my intention to benefit financially from the ruling rather I wish to uplift those less fortunate than me and I will be donating the damages received to my philanthropic endeavour, the Bonang  Matheba  Foundation which I established to advance the tertiary education of young women. I would further like to acknowledge and thank Thomson Wilks Attorneys for their unwavering support and commitment during these proceedings.

It is not my intention to benefit financially from the ruling rather I wish to uplift those less fortunate than me and I will be donating the damages received to my philanthropic endeavour, the Bonang  Matheba  Foundation with the specific purpose to help others who may be in a similar situation to obtain justice. I would further like to acknowledge and thank Thomson Wilk Attorneys for their unwavering support and commitment during these proceedings.

But will Gopane really pay her that money?

Tags
Bonang Rea Gopane
John Israel A Send an email 29 January 2022
Back to top button
Close
We use cookies on our website to give you the most relevant experience by remembering your preferences and repeat visits. By clicking “Accept All”, you consent to the use of ALL the cookies. However, you may visit "Cookie Settings" to provide a controlled consent.
Cookie SettingsAccept All
Manage Privacy