It’s a new year, all right, but a new chapter is not beginning with it, in media personality Bonang Matheba’s battle with controversial podcaster Rea Gopane.

2021 was a year of turbulence for the two. Rea Gopane had made several damaging allegations against Bonang, including stating that she had introduced her ex-boyfriend AKA to drugs.

A furious Bonang had demanded a retraction, an apology, and threatened to sue Rea Gopane. The podcaster of the Everything South African Music had apologized, taken down the apology, and fired more damaging shots at Bonang.

Along the line, the case was quiet, and it appeared like Bonang had let the whole thing slide. Well, that was until Bonang reminded Rea gopane in a tweet that courts are opening soon.

In a tweet, Rea Gopane had noted that Bonang was still mad that she couldn’t get him last year. He dismissed the “good luck” she sent to him, insisting he doesn’t need it. 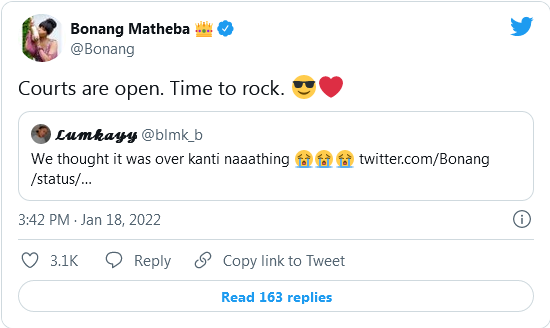 It remains to be seen what angle the case will take this year – if at all. We’ll be here to bring you new details regarding the case regardless. So you may want to follow us right away, peeps, and stay tuned for updates.

Tags
Bonang Rea Gopane
John Israel A Send an email 19 January 2022
Back to top button
Close
We use cookies on our website to give you the most relevant experience by remembering your preferences and repeat visits. By clicking “Accept All”, you consent to the use of ALL the cookies. However, you may visit "Cookie Settings" to provide a controlled consent.
Cookie SettingsAccept All
Manage Privacy