It appears like Rea Gopane is in no hurry to leave the track of trouble. The local YouTuber had been slammed with a R500k defamation suit by Bonang’s lawyers and been forced to release a written apology on Twitter.

He had made a joke of his apology statement and had been forced to release a much longer apology via video. Not done yet, he had resorted to snide remarks as well as deleting the posts he made earlier.

Yesterday 19 April, he posted the messages he received before he was given the letter of demand by Bonang, describing it as the calm before the storm. Bonang saw his post and urged him to “keep going” You can check it out below. 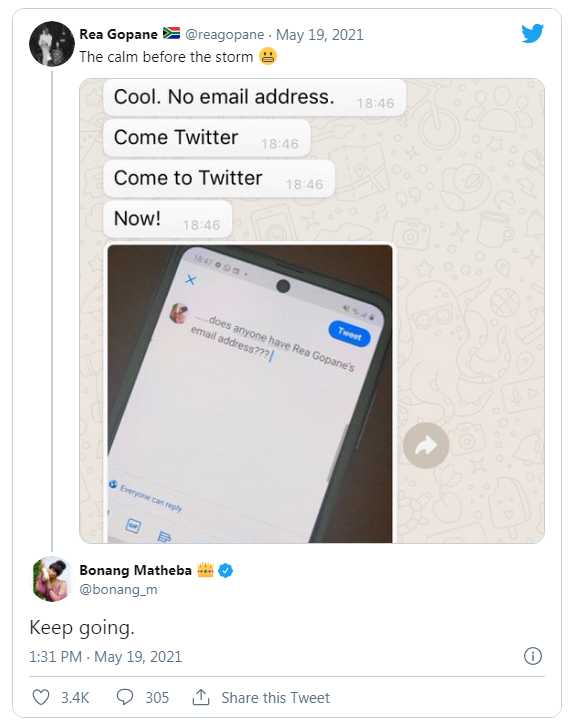 Some social media user have been warning Rea Gopane to tread softly as he has no idea what he’s really doing in his thirst for attention.

By the way, Bonang isn’t the only person Rea Gopane has put down on social media. He’s also derided Prince Kaybee. But unlike Bonang, Prince Kaybee has no plans of taking him to court and has made this known publicly.

Well, it looks like the conflict between Rea Gopane and Bonang is just beginning. Or what do you think?

Tags
Bonang Rea Gopane
John Israel A Send an email 20 May 2021
Back to top button
Close
We use cookies on our website to give you the most relevant experience by remembering your preferences and repeat visits. By clicking “Accept All”, you consent to the use of ALL the cookies. However, you may visit "Cookie Settings" to provide a controlled consent.
Cookie SettingsAccept All
Manage Privacy