Over  week go, we reported South Africa hip hop champ Focalistic’s statement he would one day become the greatest artiste in Africa. The statement had drawn mixed reactions at the time, with some saying the songster was merely ego-tripping.

at any rte, the songster has never doubted his gift, nor would he disavow his earlier claim he would one day become the greatest artiste in Africa.

It appears Focalistic is beginning to have much needed validation for the dreams he has been nursing for  a long time. Recently, Bonang Matheba shouted out Foclistic on Twitter, letting him know just how much she loves his latest jam.

It isn’t often that Bonang drops approbatory words about the works of fellow celebs, so when she does, it actually means something. In her tweet, Bonang called him a superstar, and urged him to keep soaring, leaving Focalistic in  a plane of excitement, making him wonder if he was actually dreaming or facing reality. 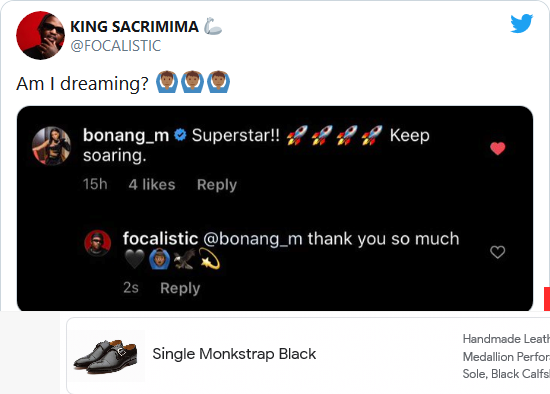 Of course, Bonang isn’t the first person to drop to fine words about Foclistic nd his rt. Looks like this is just the beginning.

Well, what do you think? Is Focalistic well on his way to becoming the greatest artiste in Africa? You might wish to join the conversation by dropping your thoughts in the comment section below